Yesterday Ant and I had a pre-production meeting at the studio. We looked over all the actor's headshots/resumes and decided which ones we'll contact about the casting. Then we took a bunch of digital photos of the location so we can assemble a storyboard/shotlist.

The process of actually blocking the shots with the camera gave us some great ideas for new shots, and it's helping me visualize the entire shoot.

Anthony had a great idea; he suggested I take one of the photos and make it into the poster below...there's nothing like seeing something like a poster to keep us psyched about the project! I'm sure we'll make a lot of changes to it as we go, but it's really fun to have something to look at right now. 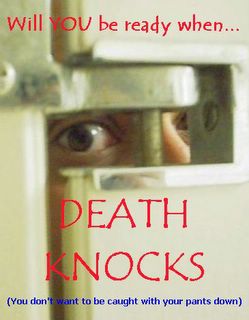 Scary, huh?
I'm especially proud of the tag line at the bottom which says "You don't want to be caught with your pants down". I don't want to give away too much yet, but you'll see what I mean when I reveal more soon! (in the business we call that a "tease"!)

Today I'm going to the studio to help out "Nikki at Noon", probably to work one of the cameras. Of course, it's snowing again, so there's a chance it'll get cancelled.

But I'm not complaining about the weather...I promised.

OooOooOOOOh!!! Freaky!! Is someone killed while using the bathroom or while doing the nasty?

I'm such a chicken. I scare easily. Cool poster, though!!!

Hi Cherry! It's actually a horror/comedy, but yeah, something DOES happen in a restroom. It has a couple of twists, which is challenging to write into a movie this short. If it works out the way I think it will, it'll run about 4 or 5 minutes. Anything longer than that I'd have to write a much more detailed script or run the risk of it being boring or slow in places.

My idea of a good short is something that gets to the punchline as quickly as possible while maintaining an entertaining storyline. I try never to say anything in 10 minutes that can be said in 5.

Of course, eventually I hope to write and film a feature-length movie, but that's not for quite a while. I DO feel that there's a "Clerks" in me!

OmG... I LOVE that movie "Clerks"... talk about a classic in the Cherry Moon family. LOL

I, for one, am totally interested in finding out what's gonna happen in the bathroom. *giggle*

I'm just glad that when you finally do vent your spleen, you'll be using a video camera instead of an assault rifle!

Artistically speaking, who's to say there isn't some value in using BOTH? Hee-hee!

But yeah Dreamcatcher, the video camera is my primary weapon of choice. After that, I like to use a rusty fork. And then beyond that, the "Three Stooges" double-finger poke to the eyes!

So that about wraps it up as my favorite weapons. What do YOU like to use?

I've always preferred a sharp stick in the eye, myself. Of course it's usually all fun and games up until then.

I saw Stephen King's "Sleepwalkers" last night. The heroine used a corkscrew to rip this guy's eye out. Talk about a stunning visual! OWWWWW!