Another incomprehensible film from David Lynch 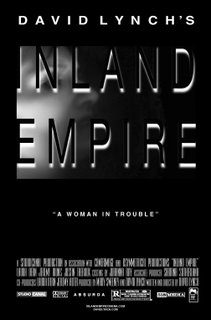 I haven't actually SEEN "Inland Empire" yet, but I know enough about Lynch to realize that there's not going to be any audience "spoon-feeding" in this latest flick.

As expected, this movie will be filled with plenty of Lynch's trademark "weirdness"; the kind of faintly uncomfortable atmosphere that pervades many of his films.

Ah yes, who doesn't love Lynch's rabbits? Between "Donnie Darko" and David Lynch, I'll never see rabbits as those cute little furrballs again. And speaking of "Donnie Darko", Darko-director Richard Kelly is also about to release his long-awaited "Southland Tales". It's going to be a wonderful year for weirdness.

Laura Dern in a predictable moment of angst. Lynch shot this movie on video (not quite typical "consumer video" as is being reported, but also not the Speilberg super high-end stuff either; he used a $3,000 Sony PD-150, and I have no idea if he used any expensive lens) and I'm sure it'll show in places. But video also can add to the weirdness, by making the image "come alive" in ways that film doesn't.

It should be interesting. For info and trailers, visit the Inland Empire website.

And after you see the movie, go online and search for an explaination.
Posted by CT Bob at Friday, February 23, 2007

I'll give it a try,let you know what i think.