My ending for "The Sopranos" 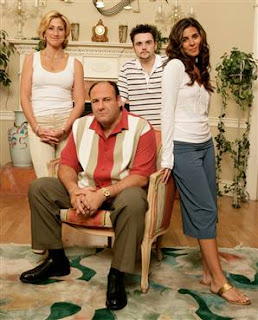 With all the controversy about the final episode of The Sopranos, I thought I'd chime in on how it should have ended:

Phil Leotardo goes to the gas station and instead of getting whacked and having his head flattened by his rolling SUV, he simply makes the phone call he wanted and orders a pizza to be delivered to his home. The dramatic point to this is that when he gets home, he finds the delivery guy had been waiting for ten minutes and his pizza got cold.

Paulie Walnuts is creeped out by the cat, so he brings it to the animal shelter. It's a humane shelter, and the cat is later adopted.

The ironic twist is that it gets adopted by Satanists, who crucify it during a black mass.

Tony visits Uncle Junior in the hospital, and later that day Junior forgets to eat his jello with dinner. Then he drools on himself while watching TV.

Meadow gets a ticket because she parallel parked with her tire on the curb.

Anthony Jr. hits his head and forgets to be such a whiny asshole. He later becomes a successful advertising executive.

Dr. Melfi decides psychiatry is a load of crap, and then she replaces Rosie O'Donnell on "The View".

Carmela gets heartburn from the onion rings, and has to buy a roll of "Tums" at the counter. The cashier gives her an extra dime with her change, but Carm doesn't notice.

Tony Soprano gets angry because he put a stupid "Journey" song on by mistake when he meant to hit the buttons for "You Can't Always Get What You Want" by the Rolling Stones. In a fit of anger he punches the jukebox and hurts his hand.

The owner of the diner walks over to see what the hubbub is about, and Tony apologizes for making such a ruckus. The entire family leaves to go to the Walk-in Medical Clinic, where Tony has to wait 45 minutes to get X-rays taken of his hand. Fade to black.

Viola! That's about five times as exciting as what the showed on HBO the other night!

In any case, hopefully we won't ever have to watch James Gandolfini eat again, or hear him noisily breathing through his deviated septum anymore.