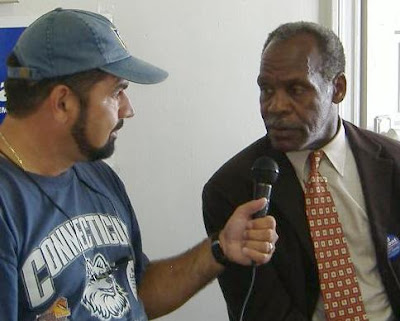 (Archive photo of my interview with actor
and activist Danny Glover back in 2006)
I'm currently working on a new short film for our local Milford Independent Film Festival, which has a July 10th entry deadline.

I'm enjoying the writing part, but the actual production is going to be much more stressful. I'm waiting for the weather to finally warm up and the trees to bloom, because a large part of my film consists of exterior shots around town, and it looks much better to have lush greenery than bare, dead limbs.

I expect to be doing a lot of shooting in a few weeks, maybe by the middle of May. Which coincides with the busiest time of the year for me, so it's gonna be difficult to find the time to do this.

The editing and post-production is a lot easier, because I can do that any time, day or night.

I'm keeping the details of my project under wraps for now, except to say that it's entirely a one-man production (which means, sadly, that it WON'T star Danny Glover) and it will be shot and produced within Milford exclusively.

More info later as it progresses.
Posted by CT Bob at Tuesday, April 21, 2009