This is an Update. I'm not doing it because I have much news to report. Because the fact is, I don't. But so many people are bugging me for updates (well, the voices in my head are...hey, they're imaginary people too!) that I'm going to post something here.

However, I CAN promise there IS stuff going on, and it's really interesting. It's just I can't say much about it until things develop further. Call me "Mister Mysterio" if you wish, but I won't fold under questioning.

By the way, right now I'm watching Morgan Spurlock's "30 Days" premiere on FX. It's quite good. He's captured the same humor and manic documentary style that made "Supersize Me" so much fun. He's like a slimmer Michael Moore, minus the vicious conservative backlash and slurs about where his loyalties lie. 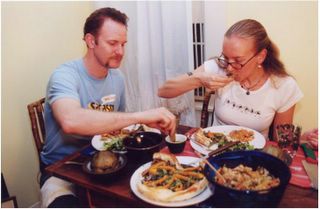 Morgan Spurlock and fiancee Alex
Speaking of TV, I just saw a commercial that made me cringe. Please, somebody tell me that the new show, "The Princes of Malibu" is just a sick joke, that they're NOT making another reality show about spoiled, rich kids with no moral compass or consequences for their actions. For fuck's sake, has sociopathetic behaviour suddenly become "cool"? Would I be cooler if I was MORE of an asshole? (Of course, my wife would debate whether that's even POSSIBLE)

Oh, and this week I watched "Pi" (the 1998 David Aronofsky movie; awesome flick!), "Kinsey" (not bad at all), and a guilty pleasure: "Fight Club" (ya gotta love that potty-mouthed Helena Bonham Carter). Faulted though it is, Fight Club is a crazy wild flick. Check your logic at the door and step aboard for a fun ride.

Okay, that's my non-update Update. For someone who didn't have anything to say, I sure as hell took a long time to shut the fuck up.
Posted by CT Bob at Wednesday, June 15, 2005

Ahhhhh CHEEEET! I totally forgot that show was on today! I LOVED Super Size Me... totally made me never want to eat McDonald's ever again... for like 4 months.

I wonder if they'll show a repeat of that episode? Or maybe I can find it on the net.

And yes, they are doing a reality show with some more rich brats. Too bad there isn't a royal belt to slap their silly asses with.

Another show I just started watching is "Entourage", which is a fictional reality-style show, that follows a Hollywood actor and his young friends through real-life L.A.

It's funny and they take shots at the Hollywood lifestyle. On HBO, with Jeremy Piven as the sleazy agent.