Kevin Smith: Too Fat to Fly? 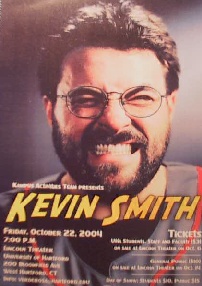 Kevin Smith is one of my personal heroes. I've often talked about his movies, which quite honestly aren't for everyone, but for those of you who like me possess a certain sense of humor, they're great!

But he's also an amazing public speaker, and I saw him at one of his famous Q&A "evening with's" at the University of Hartford (poster above) about 5 years ago. Kevin often waxes hysterically about his personal experiences, and as a result we all know probably way too many details about his life.

So just this week, when I heard Kevin was kicked off a Southwest Airlines flight allegedly for being too fat, I thought "This is gonna make a great story!"

Sure enough, as soon as Kevin returned home from his Oakland to L.A. flight, he sat down with his wife Jen and recorded a 90-minute podcast that liberally smashes the errant airline. The "SModcast" (so named because it usually features Smith and his long-time producer Scott Mosier) is available for free from the website linked below.

Trust me, it's a really funny hour and a half, with Smith alternating between humorous rage and mock outrage. The place to get it is SModcast.com and you want to download or listen online to SModcast #106, "In which, surely, our hero is Too Fat To Fly. And don't call me Shirley."

And the music that plays in the background is, of course, the musical score to the film "Airplane". Obviously.

Oh, and it strikes me as a public relations bonanza for Smith, who's latest movie "Cop Out" is opening in a week or two. You can't BUY that kind of publicity!
Posted by CT Bob at Tuesday, February 16, 2010