I love the Spirit Awards...it sort of reminds me of what an awards show would be if the "Our Gang" kids ran it in an old barn. It's a loose, fun, anything-goes event that celebrates independent cinema. Minimal pretense and significant silliness, although I miss John Waters not hosting it this year.

"Sideways", a terrific indie movie, won in every category for which it was nominated. Paul Giamatti, who was sadly overlooked for an Oscar nomination, got the recognition he deserves. Thomas Haden Church's performance in Sideways nearly stole the movie, and Sandra Oh, while not nominated, gave a performance that had women literally screaming in appreciation at that scene, which resulted in Jack's bandaged nose. 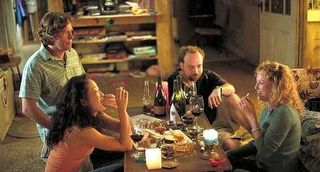 Good show this year. Congrats go to the winners.