I heard the news today, oh boy...that the good doctor had killed himself...
and though the news was rather sad, I felt I had to laugh... 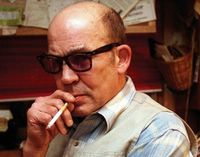 Strange days indeed...for whatever reason, a founding member of my personal Hall of Fame chose to end his life. The universe suddenly became a little darker and sadder for me, knowing that HST will no never again be holed up in some fortified compound with a fifth of Chivas Regal, a .44 Magnum, and an IBM Selectric typewriter; spinning his magic while rock and roll blasts from six foot high speaker stacks and peacocks wail mournfully outside in the moonlight.

I feel fortunate that I once saw Hunter Thompson in New Haven about 20 years ago, and I got to ask him a question...jesus, I just got chills when I think that the Good Doctor actually spoke to me about Nixon in his rapid-fire way, all the while taking sips out of a massive tumbler of scotch. There was no one else alive back then I would have rather had the opportunity to speak with.

I can write ten pages of my feelings about this, but whatever I write can't possibly hold a candle to what HE wrote. Go out and read his books. He was truly an American original. 'nuff said. Sweet dreams, Good Doctor....as your attorney, I advise you to forever rest in peace.