Still working with Lori to get "Grandma's Kitchen" formatted for broadcast. Should be ready in another week or so. Look for an update then.

Other than that, I've been on my boat a lot. And I've been doing some writing. Unlike a lot of writers, I am SO frickin' tanned right now.

Ant's in Puerto Rico for another few days I think.

I can't wait to see "The Aristocrats"; I heard an interview with director and comedian Paul Provenza today. I think the subversive aspect of this film is what appeals to my inner-anarchist; it's going to be the filthiest movie ever made, and all it shows are comedians telling the same joke in various ways. They chose to skip getting an NPAA rating because there's no way in hell that they'd get anything less than an NC-17. One movie chain has already refused to show it! 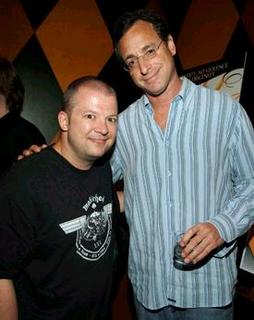 And the only thing this movie shows are a lot of comics TALKING! No violence, no sexual images; just an old joke that's known for being as filthy as possible. Told in a bunch of different ways.

It's simply United States Constitutionally-protected free speech, if you read the fine print on that amazing old document. It's in there somewhere. Really.

Like I said, this movie is going to be subversive.