Because I can, I'm going to buy a wireless microphone set.

One of the big obstacles we had when shooting "Death Knocks" was making sure the sound quality was good. We used studio mics that had to be hard-wired. Not very convenient or (unfortunately) reliable.

So I decided I need a wireless system. I can't afford a professional setup, but I found a cheap-ish system that looks like it'll do. The Nady Duet Dual Lavalier Wireless System. 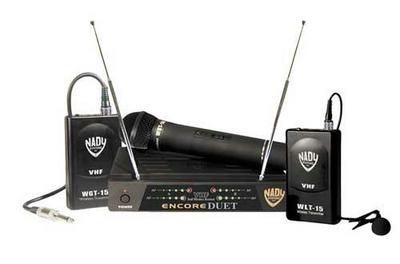 Pictured here (with the optional hand-held mic and guitar pickup) it includes a dual frequency receiver and two body-pack lavalier (lapel) mics. The two mic sources are mixed in the receiver and sent to the camera.

Viola! Two mics, mixed together while we shoot, going directly into the camcorder. All for about $160. Now we can record two people having a conversation without struggling with a boom mic or dealing with those awful studio mics.

Of course, there ARE a few operating limitations...the max distance recommended is 250 feet, but you can get 500 feet ideally. I'll probably keep it within 50 or so feet with direct line-of-sight. The frequency response is adequate for our needs, although at some point we'll probably require a higher end system. And I'm a little worried about crosstalk and interference, but I'll deal with that later...I can't afford anything better right now, and I want to start shooting ASAP with usuable sound.

Probably I'll order it after my vacation; I'm gonna be sailing for a week after this coming week, so I won't be able to get rolling on any projects until after we get back.

Whoa! That is a pretty nifty thinga majiggy!!

It looks like something that little martian guy from Bugs Bunny cartoons would use. :)

Nothing wrong with big boys toys?

Cherry, yeah it's a sci-fi lookin' thing, but that's what you need to do to get good sound for a movie. The problem with the mic on the camcorder is that it picks up all the sounds around, not just the actors talking. When you watch the tape, you get distracted by all the noise, and it takes you out of the scene you're watching.

By using wireless mics, you get "pure" sound. It makes a big difference in the finished product.

Of course, the finished "product" can STILL suck, especially if I write a crappy script or operate the camera like Michael J. Fox on the day he forgets to take his meds! But at least the sound will be one less thing for me to screw up.

Gazza, yeah, I gotta spend the money quick before a practical need for it comes up! What I don't have, I can't waste on things like taxes or food!