I can't believe I'm only starting this NOW! 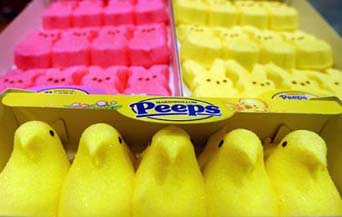 Sometimes the obvious is the hardest thing to see.

Today I was reading a blog, and several messages referred to those awful sugary concoctions known as Marshmellow Peeps. The mental image of "Peeps" suddenly triggered a long-ago memory in me.

Several weeks ago, I was reminiscing with an old friend about a place where we both worked many, many years before, and the subject of "Peeps" came up. We used to have a lot of laughs at that crummy job, and we started talking about the best stories we had from way back then. Some of the funniest stuff had to do with the "Peeps" and those Chocolate Easter Bunnies.

Before I knew it, my friend and I brought up a good eight or ten hilarious incidents that I'd almost forgotten. Some of the stories were so good, we had to stop for a bit just to let our laughing die down. It was fun talking about the good ol' days, but it didn't occur to me right then that there was anything noteworthy there.

So today when I read the thing about the "Peeps", I started forming an idea in my mind. Why not write down everything I can remember about the job, the adventures, and the people we worked with, and try to craft it into a coherent story?

I blinked a couple of times in my usual dumbfounded way, then darted to the den and fired up Microsoft Word. An hour later, I'd drafted a dozen true characters, a bunch of bizarre incidents, and a rough storyline that will work if I make a reasonable effort to polish it. I just re-read it, and see that it will fit in perfectly with a Porkies/Caddyshack/Mallrats demographic. And that's exactly the kind of movie I can see myself writing (and maybe even making).

I can't believe it never occurred to me before to write all this stuff down!

Yeah...great; now I've got to add "complete my screenplay" to my TODO list...like I'm not busy enough right now!

But hey, when writing is this much fun, it hardly feels like work!
Posted by CT Bob at Friday, April 14, 2006

Dump the politics and do the screenplay - your public demands it !!!

(This is me, on another computer)

Heh-heh! I think I'll be doing both, but the politics will go on another blog. I'm trying to think up a good name for it.

The screenplay is loads of fun to write, so I'll be doing that also. Plus, the boat's coming along, and I'm updating THAT blog too, later tonight. Sheesh, now I've got THREE blogs to keep me busy!

One of that easter bunny's eye's have bogged out!

You should see how cool they look when you leave them in front of a heater!

That's the best thing for it,chocolate goes straight to your arse and hips!