Every time I see Ant act, I'm impressed. He's amazing...look at him putting himself into his own movie! I'd start calling him "Quentin", but I think he's a better actor than Tarantino. Just look at him emote surprise and outrage - 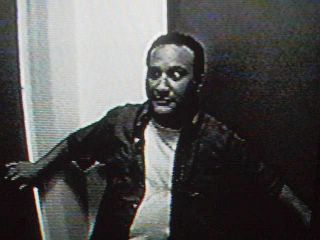 "You CRAZY, mang!"
We're all set for tomorrow. Everyone will be there for the shoot, with the exception of Paulina, who's got a gig in the Big Apple (75 minutes away by train) tomorrow. She doesn't have any scenes left, but she's a big help as crew and has an extra camera. However, we'll do fine with the two Chads and us as crew.

We're going to knock out most of the rest of the scenes and put together a rough cut sometime in the following week or so. Then we'll see where we are and what more needs to be done.

Oh, and I'm thinking about selling "Production Van 2000". I need to raise funds for a decent wireless mic setup, and maybe a shotgun mic.

In the middle of production and still a blogging fiend, Bob. You're a machine. Glad to hear things are going well. Good luck!

Thanks Jane! Yeah I decided as we approached production I was going to try to post something every day. That way we're keeping the crew involved between shoot days, and we're also generating (an admittedly small) buzz for the movie and our production company.

And it'll be fun to look back at my naivete and innocence about the process once I've been "through the fires".

After all, I'm only going to make ONE "first movie".