One more week (and boat pics)

We have a scheduling conflict with one of our actors, so we're not going to get the next shoot day in until the 23rd. So this is a down week, where we'll be able to review the footage from our most recent shoot, and get started on some editing.

In the meantime, I launched my sailboat for the season just two days ago. We went out sailing the last two nights after work in light winds, and earlier this evening we took part in our first club race of the season. 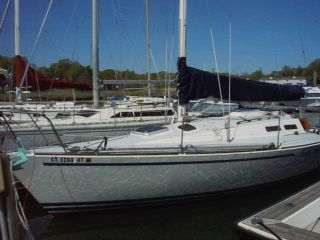 Full Tilt
The wind was honking tonight! At times it topped 25-30 knots, which is fairly heavy for club racing. We were boarderline overpowered, which on a sailboat means you're heeling at about 35-45 degrees, and it's all you can do to hang on and control the boat...which isn't that easy, because the rudder tends to lift out of the water at that angle. Then, while rounding the first bouy, we got tangled up with two other boats, which led to a collision between us and a 27-footer, which hit us solidly amidships. 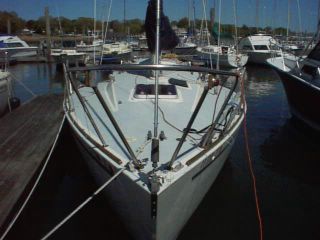 Imagine it coming straight at you
Luckily, nobody was hurt in the crash, and other than our toe-rail getting demolished and a grapefruit-sized chunk of fiberglass being crushed, we came through it remarkably well. After I bandaged the gaping wound in my hand (from the tiller getting wrenched away at the moment of impact), we resumed racing and ended up having a pretty good race. 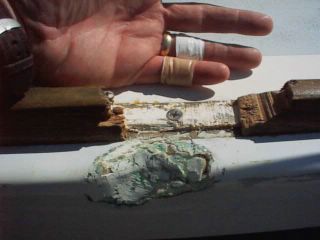 My dinged digits and busted boat
Afterwards, over cold beers and potato skins, we discussed the incident with the other boat's skipper and crew. They (of course) suffered no damage whatsoever, having smashed us with their steel bow plate. However, they did admit to a reasonable amount of responsibility over the collision, and pretty much that's what I wanted to hear. At least nobody was killed...and we did beat them, which prevented them from adding literal insult to injury.

So, right now trying to type is a bitch with two fingers on my left hand bandaged up, but I'm glad we sailed tonight. We had a blast, and in spite of the damage and aches and pains, it was fun.

And in some ways, my sailing experience is similar to my filmmaking adventure; yeah, it might be a giant pain at times, but all in all, I'm sure it'll be worth it once we're done.
Posted by CT Bob at Thursday, May 12, 2005

OmG! This must be the week of crashes for everyone!!

I want to go sailing. I've never been sailing in my life, even though I used to live in CA. I've been on boats... ships even... but I've never been SAILING! Like, for fun. :)

Enjoy this week... downtime sounds good to me.

Between May and October there's nothing more important to my wife and me...someday I'm going to write a book and call it "Yachting Is My Life!"

We cruise AND race it. Cruising is going to various anchorages and spending the weekend kicking back and relaxing. Racing is a thrilling and tense experience; I've never been more scared while moving at 7 miles per hour! It's the most fun you can have at "slow" speeds.