Tonight was the World Premiere of "Grandma's Kitchen", and Joyce and I threw a gala party at "Chez Adamz" to celebrate this momentous event. 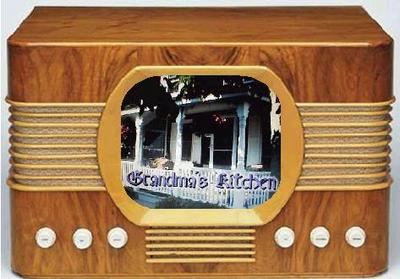 All the stars showed up, greeted by the world's shortest red carpet (true, it was Lori's bath mat, but it looked fabulous). Lori was attired in a stunning black gown and garnashed with a sparkly silver lamae shawl. She was accompanied by the always-dapper Tim, looking casual yet swarthy in his button-down cream colored shirt and walnut sport coat.

Lori's parents made a memorable entrance, along with sister Teri and production crew Anthony and me (Bob). Chad ("green", from the "Death Knocks" production crew) showed up later.

We all watched the medium-screen TV (25", which is mighty average these days) as the zero-hour approached. As the "Grandma's Kitchen" logo and title screen appeared, we all cheered. The 25-minute show was met with laughs, yells and funny comments. Aunt Nina, who is no longer with us, stole the show. I was featured during the taste-testing segment; it was my TV debut!. The episode finished with a song by the swing band Swing39, who'd appeared in "Grandma's Living Room" earlier this year and taped about 12 songs for use in the show.

Afterwards, we shared snacks and appetizers, along with a goodly portion of beverages. Anthony taped me interviewing the guests after the show. I had the most fun asking Chad his memories of Aunt Nina, whom he'd never met. We ad-libbed a funny segment, and someday I expect we'll see this on the "Grandma's Kitchen" DVD box set, special features section!

It was a fun night, and look for "Grandma's Kitchen" Mondays at 7PM on Cablevision channel 77 in the Bridgeport, CT area.

ABOUT THE TV IN THE PICTURE: This was Bang & Olufsen's first-ever television, introduced in Denmark in 1950. A real classic!
Posted by CT Bob at Tuesday, October 04, 2005