Lori wants me to reserve some studio time this week so she can tape some additional introductions to her DVD versions of the show. As I mentioned before, we taped her speaking in front of the green screen in the studio, and I later added appropriate pictures in the background using the chromakey function on my video editing program. 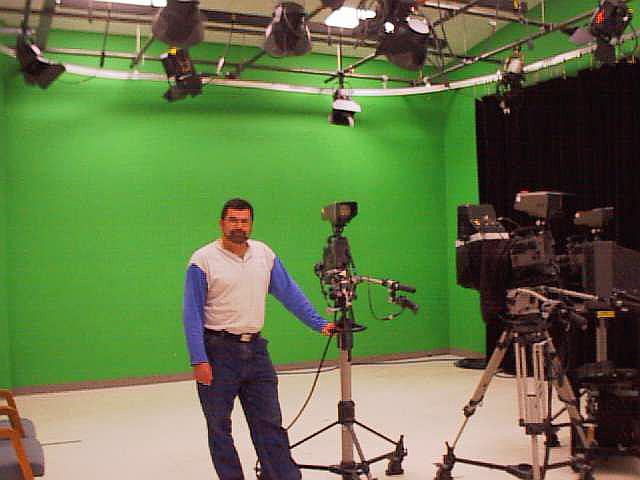 We'll work out the audio issues we had last week, and I'll have more time to download appropriate images for the overlays. Maybe I'll be able to use some archive video in the background in addition to the still photos. That'll be fun.

My absolute by far favorite TV show of the new season (besides "Grandma's Kitchen", of course!) is the NBC comedy "My Name Is Earl". 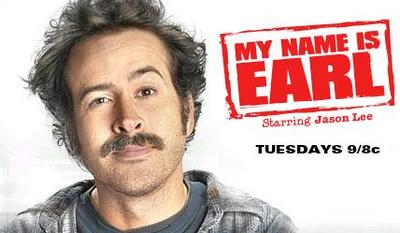 I'm a long-time Jason Lee fan, due to my fanboy worship of Kevin Smith films like "Mallrats" and "Chasing Amy", and in this new show his talents are being used to perfection. The writing is bizarrely funny, and they include hysterical little things that you might miss if you're not paying attention; like when Earl and his brother realize a childhood acquaintance is gay, and the song "99 Luft Balloons" by Nena starts playing...Christ, I almost broke a rib laughing! And it doesn't even make much sense comedically, except that it was so unexpected.

Another thing I like is that the camera work is strikingly similar to the cinematography in "Raising Arizona"; really hectic. Earl's brother is played by Kevin Smith alumni Ethan Suplee, and Earl's ex-wife is the sexy and white-trashy Jaime Pressly ("Not Another Teen Movie").


So tonight (Saturday) NBC decided to do us all a favor and repeat the first three episodes back to back. I figured it would be a great opportunity to tape them. The TV listings said the show started at 8:30PM. That would be nice.

It didn't though...it started at 8-fucking-29! And if you've seen the debut episode, 90% of the back story is told in the first minute. Once you miss that, it's not really worth saving.

Now, you're probably thinking my clock is set wrong. NO! I'm normally a bit of a slacker about a lot of things, but when it comes to the concept of time, I like to be EXACT. Like, within a second or two...I know, I'm a maniac.

Here's proof: I just this week set my VCR timer and computer clock to the Naval Observatory Atomic Clock Online, available by clicking here Online Precise Fucking Time! And I set the VCR clock about 20 seconds ahead, just to build in a little leeway. I figured, hey these are network TV guys, they can probably hit a button within 20 seconds or so.

But NBC for whatever reason seems to be run by retards who can't hit a fucking button even CLOSE to the proper time! And even worse, they were EARLY rather than LATE. Bastards!

So I'm kind of pissed at NBC because of their moronic broadcast engineers, but I'm glad they managed to come up with a great program like "My Name Is Earl", and I'll probably be able to forgive them.

I LOVE this show!! Have you been to Kevin's message board?

All the time! I get a kick out of Kevin's "Boring-Ass Life".

I dig all the little View Askew references in the show. Did you see this week's ep, when Earl was replacing all the stuff he stole from the convenience store, and he called it the "Quick Stop" (ala "Clerks")?