Minutes ago the premiere episode of Project Greenlight 3 ended. This is the first time I've ever watched this show, and I'm totally hooked!

Good golly Miss frickin' Molly! I can't believe how much this stupid show got under my skin! Watching those hopeful screenwriters and directors competing for a shot at the big time totally floored me. I identified so strongly with that weird David Lynch-y type director that I actually cheered when he won the spot. 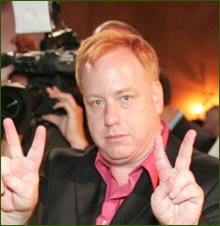 John Gulager
They chose a script named "Feast", which apparently is about flesh-eating monsters of some kind. The consensus was that it wasn't the strongest script artistically, but the studio dicks seemed to think that it has the greatest commercial potential.

Which tells me that most likely the movie is gonna suck...that almost ALWAYS happens when studio execs force artistic compromise. But at least it'll be fun to watch how that weird motherfucking director dude copes with making a movie. I'll be rooting for the guy!

(note to Australian readers: "rooting" means "cheering for someone", not fucking him!...yeah, like I got any readers from "Down Under". Oh, and you can have Paul Hogan back anytime now; go ahead, just take him...wanker)

Okay, so now besides "24", "The Apprentice", "The Contender", and "South Park", there's another frickin' show that I have to watch! Project Greenlight has now made my "can't miss" list! I can't wait until next Tuesday.

In other news, we have auditions scheduled for the 23rd. It looks like we'll be able to finalize casting by a week from Friday, and plan on shooting the thing in the first half of April. I'll post updates as soon as I hear anything new.
Posted by CT Bob at Tuesday, March 15, 2005