From The "Maybe We Should Have Told The Cops" Department

Being something of a filmmaker (I like to kid myself), I'm aware of the millions of tiny details that have to be addressed when shooting a film. Such as coordinating the schedules, budget, locations, equipment, etc. But whenever you shoot on location (even if you have a permit), it's a good idea to let the local authorities know what you're doing.

Especially when you're filming at a commercial airport.

And especially when your actors are posing as terrorists with assault rifles attempting to hijack a Lear jet. Read on... 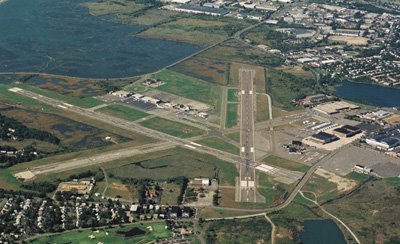 STRATFORD — Police with lights blazing and sirens blaring descended on Sikorsky Memorial Airport Saturday after reports of a dozen armed men of "Middle Eastern origin" on the tarmac.

What authorities found instead was the crew of a low-budget independent film called "Soldier in the Shadows." Crew members were dressed in dark-colored clothing and carrying large black rifles. The political thriller is shot in a post 9-11 world that involves a former Delta Force operative searching for an Arabic terrorist in New York City.

Stamford resident Kit Redding, who is co-producing the feature film with Umo and David Olivera, said they were shooting one of the last scenes at the airport around noon when police in about six cruisers burst onto the tarmac.

"The scene involved an Arab extremist who is trying to get away in a Lear jet with some important information," Redding said.

The film crew began shooting at the airport on Friday and wrapped up Saturday. Kurt Sendlein, superintendent of operations for the airport, said it was an embarrassing miscommunication that resulted in the response by both the Stratford and Bridgeport police departments.

He said a pilot who saw several armed men of Middle Eastern descent near the planes contacted the control tower. The tower personnel, however, failed to tell the pilot about the movie and the pilot then called 911.

"The pilot did what he was supposed to do," Sendlein said. "He saw something that was suspicious and he contacted the authorities. Unfortunately, we had a breakdown in communication. It was more of an embarrassment than anything."

Right. The kind of embarrassment that can get you killed if the cops happen to show up in the middle of an action scene.

The article states that a similar situation occurred earlier in the shoot while filming on a rooftop in lower Manhattan. The cops burst down the door with guns drawn.

Sheesh! You'd think after THAT they'd figure it out. But nope, no way. Maybe they think their movie would get a lot of publicity if a couple actors got blown away during the shoot. (Trust me, there's directors out there who would drool over notoriety like that!)

Thirty years ago, when I was shooting a high-school film (Jesus H. Christ, has it really been that long?), we had our actors running all over downtown with fake guns drawn, and nobody blinked an eye. These days, living in this post-9/11 world, I'd have to be clinically insane to try something like that.