If you've always dreamed of a nice peaceful ocean voyage, where you can enjoy a glass of wine while strolling on the promanade deck of a luxurious ocean liner...then this ain't the show for you!

"The Deadliest Catch" season two premiered this week on The Discovery Channel. The Deadliest Catch is a thrilling documentary series about one of the world's deadliest jobs - that of the Alaskan crab fisherman. Each week the series follows the captains and crews of five ships on this dramatic voyage as they struggle against treacherous conditions to earn a living and, in many cases, to uphold family tradition that has lasted for generations. 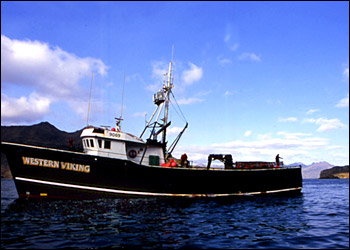 Forty-foot waves, freezing temperatures, swinging 700-pound crab pots, a nearly 100 percent injury rate ... but also the chance to earn enough money for a family to live on for a year or more, for just a few months' work. 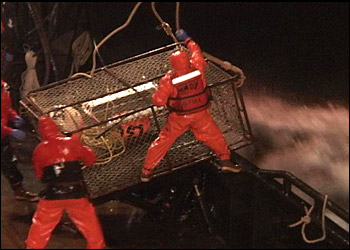 I'll admit, it looks pretty damned thrilling. They showed a little bit of what the camera crews had to put up with, and even though it looked slightly less dangerous than what the fishermen were doing, they were still out there in the frigid cold on a boat that could sink (they often do) in the Alaskan seas. Not a job for the weak of heart.

Tuesdays at 9PM ET on The Discovery Channel.
Posted by CT Bob at Thursday, March 30, 2006

Iv'e heard one guy lost a finger so they bandaged it up for him,made him a cup of tea then sent him back to work?

I didn't see that episode, but it wouldn't surprise me; these guys are tough. If that ever happened to me, I'd probably scream like a girl and pass out.

And with my luck, there would be a camera crew taping it for broadcast!