The tradition of NBC having good sitcoms on Thursday night has been revived, with the addition of "My Name Is Earl" and "The Office" to it's lineup. 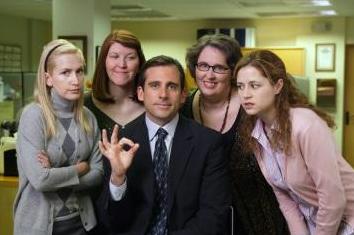 Steve Carell ("The 40 Year-Old Virgin" and former "The Daily Show" correspondent) heads a fine ensemble cast in this show about, well, an office. Apparently this show was adapted from a BBC sitcom with the same name.

The unusual way the show is taped looks something like a documentary, but without any narration or (to me, anyway) point. The characters are viewed in an almost voyeuristic way, and have frequent pauses of self-consciousness that brings the viewer into the moment in an uncomfortable way. Which is half the fun of this show; awkward moments and embarrassing situations abound.

Not only is the writing superb, but Carell is joined by a solid group of actors featuring Rainn Wilson, B.J. Novak, Jenna Fischer, and John Krasinski, who each week bring depth and humanity to the chaos.

The Office (English) was like a documentary,but i believe it was funny if you had worked in an office youself, and had seen the same type of characters?

Yeah, it's taped like a documentary, but with no real focus. I think it's supposed to be like "cinema verite" (or "ve'rite'"...I can't do accent marks with this program), only scripted. I'll have to check out an episode of the BBC version sometime.