I'm wide awake at 1:00 AM, and trying to keep the noise down so my wife can get a good night's sleep before having to get up at 5:45 AM for work.

But it's hard, because UConn had just put together a stunning comeback to tie the Sweet Sixteen round game against U-Dub (Washington) and force overtime.

UConn had trailed Washington by as much as 12 points, and was all but eliminated, down by 4 points with 21.2 seconds left. But a foul shot, some great defense, and a last moment clutch Rashad Anderson three-pointer tied the game and set up a dramatic victory. 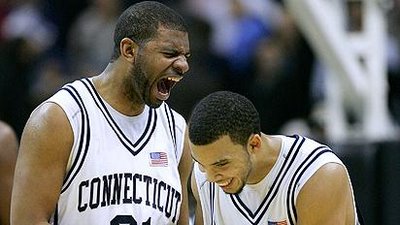 Marcus Williams bagged a lot of 3's and scored 26 points. UConn took control in the overtime period and won 98-92.

Although they won, UConn had an unbelievable 26 turnovers and were slow to rebound on the defensive boards. Their next game is against George Mason (who?) an 11-seed on Sunday. Unless the Huskies sleepwalk through that game, we should see them in the Final Four next week.

And what the hell happened to Duke yesterday? Those idiots messed up my bracket, because I had them going to the finals. Looks like I'm going to finish out of the money now because of them. Morons.