Today we started with finishing up our cable training with using multimeters to troubleshoot bad connections. That took about an hour, and then we piled into a van for the short ride to the location scout at the house where we'll shoot next week. 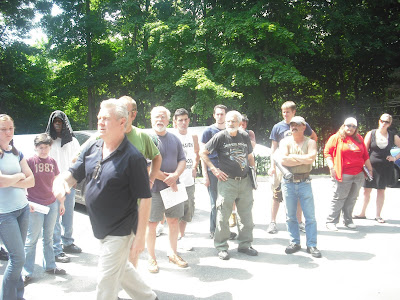 Director Richard Dobbs led several production departments including Sound on a walk-through of the various scenes and camera placements. Each department asked questions on production issues that have anything to do with their area of responsibilities.

The location scout cleared up several issues we had, but there are still some things that we won't know until the day of the shoot, so we'll just have to be ready with many different contingency plans. One thing we do know is that if it's as hot during the shoot as it was today, we're gonna fry our asses during the exterior scenes! Plus, the house is so small that only three Sound dept. people can be inside during a camera roll, meaning the rest of us will be stuck outside.

Then we got back to the school, and broke for a short lunch so we could get back to running scenes and practicing with the sound equipment. 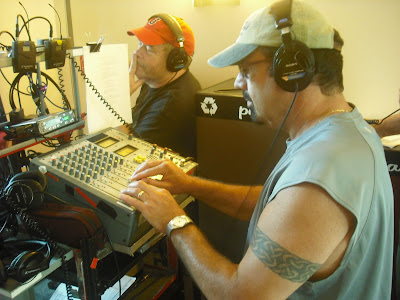 This is me mixing a scene where three actors were all mic'd differently; one with a stashed carioid mic, and two with both a stashed hyper-cardiod and a short shotgun on a boom. The scene required constant mixing depending on the dialog and action. It was challenging at first but I managed to find levels that worked and I had a lot of fun learning how to do it.