Today was the Green Team's day, and it dawned sunny and quite comfortable compared to the steam bath we'd just spent the last two days enduring.

Colleen, Jon and I were on the set, mixing, booming and thirding for most of the day. It was fun but challenging at times. 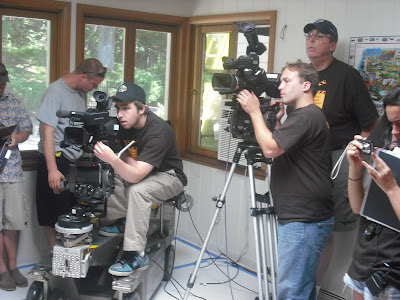 These are the two cameras that filmed most of the scenes today. I got to boom a 6'5" guy in a room with a 6'11" ceiling, or so it seemed. "Tiny" just doesn't leave a lot of headroom in any shot with a low roof. But I mic'd him anyway and didn't dip the mic into the camera frame while dancing just above the frame line. Too bad there wasn't much in the way of dialog, but not every scene has a lot of talking in it. 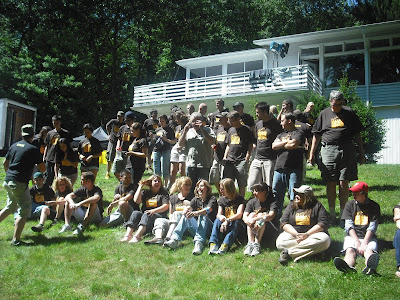 During lunch we all gathered in front of the location for a team picture, hence mostly everyone wearing the FITP crew shirts. 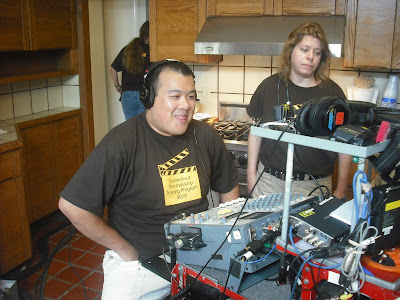 Green Team member Jon mixed while I was out on the set. We had a few bizarre headphone issues, which led to me being sonically blasted through my cans while I was booming. They're called "cans" because back in the old days, they used two tin cans and a length of twine to communicate with people. If you believe that, there's definitely a bridge in Brooklyn that you'll want to snap up at the first opportunity.

Anyway, my "cans" were so goddamned loud that the camera and A.D. crews motioned for me to shut it down as they got ready to roll. Being in Sound means never having to say you're sorry; and it definitely means that you should NEVER be the fucking cause of a sound problem! I actually never physically felt someone's eyes drilling into me until I told the director and A.D. that we needed to hold the roll for Sound.

And the drilling continued as we took a couple minutes to solve our problem; which, speaking of drilling, made me feel about as popular as BP right about then.

I had to unplug my phones from the jack because there's no volume control on it, and when the A.D. calls for "sound", I'm supposed to listen to the mixer say "speed" on my cans and relay that back to them. But being unplugged is better than being deaf, so finally someone called out "speed" from the other room. Eventually we figured it out, but my ears were ringing for the rest of the day. 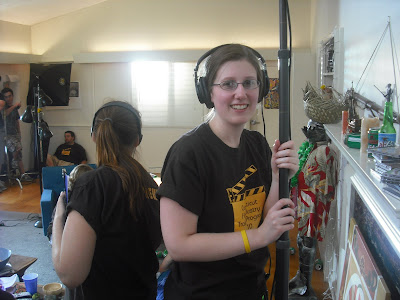 Green Teamer Colleen boomed the scene that will likely get the biggest laugh in the film, but in this picture you can't see the actor she was miking who was lying face down on the floor right behind her, pretty much wearing only a pair of skimpy underpants.

She was a trooper and flawlessly boomed quite a few takes over several setups before we relieved her. Colleen seriously rocked today, and she proved that it's not just the biggest (and noisiest) assholes who can do a great job in Sound! She's a star.

Chat tasked me with mixing the most technical scene of the day, our final shot outside. We had to deal with three talking actors walking from around a corner, up a slate walkway while being filmed from a dolly, and into a small porch area. And a bit of a breeze. And about a 30-minute window before it got so dark they'd have to light the entire goddamned area, which obviously nobody was thrilled to have to do.

Good. No pressure. Just the way I like it.

I had to decide on how to mic it. Knowing that Chat firmly believes in "Boom it until you can't", I designed a two-boom scheme that had Jon using the long shotgun to follow the actors from the corner up to the porch, and then Sam using the short shotgun to catch their dialog as they turn to enter the house.

Well, after a rehearsal we could see that there was no way the shotgun could pick up the actors before they rounded the corner, so Chat called for a wireless lav on "Tiny". A take or two later and we realized that Paul needed a wireless lav also. Which gave me a total of FOUR mics to mix, which was a fantastic challenge.

I did screw up a bit by not checking if the second boom was properly connected to the mixer when we decided to go for it. It wasn't, and although I found and fixed the problem quickly, Chat looked at me and said grimly, "That's one!"

Jesus, I thought, bad things usually come in threes! I better make sure I do everything right from here on in and keep Chat at "one"!

We ran through a few more takes, and with the light leaving, we needed get some usable tracks. Chat mixed one take just to be sure, then he had me mix the final two takes. I got the last one nearly perfect, although if we didn't have to worry about the light, I would have liked to do one more to really nail it.

But overall I'm very pleased with how it went today. The way Chat teaches is that he constantly pushes you way the fuck past your comfort zone, which can be nervewracking but also gives you the opportunity to shine.

I don't know if I officially "shined" today; but without a doubt I definitely "glowed" a bit!

And, considering how far we'll all come in the last 18 days, I feel pretty durned good about it. Two more days, then we wrap. Honestly, I can easily do this for another month!