Friday was the last day of pre-production. After this, we start our shoot on Monday. 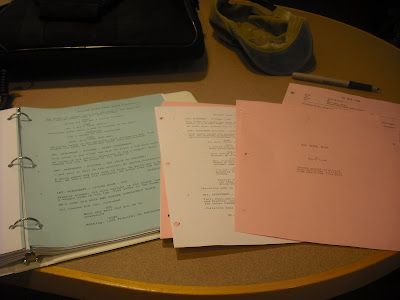 This morning we got pink pages. Scripts are often revised and updated as the production day approaches. The first script is printed on normal white paper. Then, when they change something, the pages they send are blue. Often you'll get just the pages with changes on them, with a cover sheet that instructs you to replace which page numbers with the new pages.

The next revision is typically pink. There's a whole spectrum of colors they use to make changes to the script, and if there's enough revisions eventually you'll get back to a white script. So now I've got a tri-color script. In this case, the pink pages are the final pages. After today, any changes will be made while shooting. 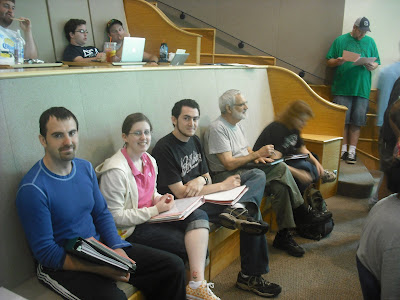 The big pre-production meeting. This is some of our department, gathered to hear the department heads discuss each scene and any production issues that might come into question. (L to R: Atanas, Colleen, Daniel, Chat, and Tracy) 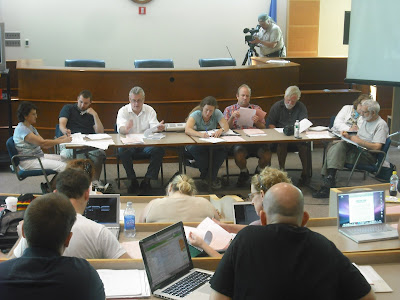 Danielle Rigby (center) led the meeting, reading each scene and opening up the discussion. We finished around lunch, and now everyone is theoretically on the same page. 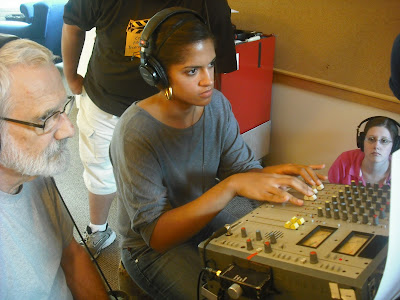 After lunch we had several hours to get everyone some experience with mixing sound. This is Samantha watching the action on her monitor while changing levels. 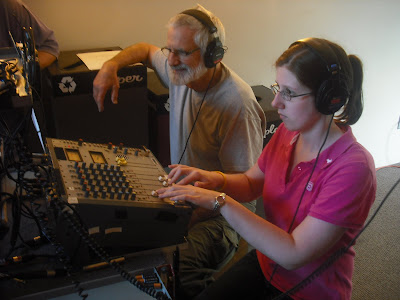 Colleen watches intently as the scene progresses. We each got a chance to mix, boom, and third all afternoon.

Because a sound crew is typically three persons (the sound mixer, the boom operator, and the "third" or cable puller/utility person), and the location is much too small to have everyone involved in every scene, Chat divided us into three 3-person teams, to trade off jobs over the course of the shoot. I have Colleen and Jonathan on my team, and we're the "Green" team. The other teams are "Red" and "Blue".

Being the creative types we all are, we chose creative nicknames. The Blue team became the "Blue Angels". The Red Team became the "Red Horde". Which was immediately bastardized into the red "whores", and then they were tagged at various times with the Red Harlots, the Red Tramps, and the Red Courtesans (me being all literary, and which someone misheard as "cortisone").

When Chat asked what the Green team wanted, Sam chimed in with "Green Goblins"! Oh great, not my first choice at all. I wanted the Green Hornets, or the Green Flash, or even the Green Team. "Goblins"? Eh, not so much. Oh well, maybe we can get "Hornets" to stick on Monday...

Anyway, we finished our final scenes (and I was "ADA Sutherland" when called upon to act, and you can ask Colleen, but I totally nailed that character!!!) and began our load out. We had to meet the Ryder truck at 4:15, so we trundled all our gear downstairs from the Law Center to the parking lot. Tracy, Colleen and I did the actual delivery at the location as Chat released some of our classmates who wanted to depart early to miss the Friday traffic. I was going sailing that night and didn't mind staying a bit longer, since there was a full moon and the weather was awesome. 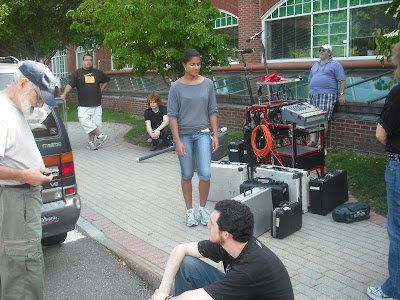 That SUV belongs to Chat. I love how he's a dyed-in-the-wool liberal with a 2004 Kerry-Edwards sticker on his car, along with a Kucinich for President sticker on the other side. He's aware of my political leanings, but I don't think he's had a chance to read my ConnecticutBob blog yet. I'll have to send him the links to my Kucinich interviews.

We finished the load out at the location before 6, and my immediate impression was "Holy shit! How the fuck are they gonna get an entire film crew in that tiny house?"

Well obviously, we'll see. And we'll probably be incredibly impressed at how well the instructors manage to bring together all the disparate elements of a shoot into a sort of controlled chaos.

Call time for Sound is 8:30 at the North Lot. Something tells me I'll be there plenty early.