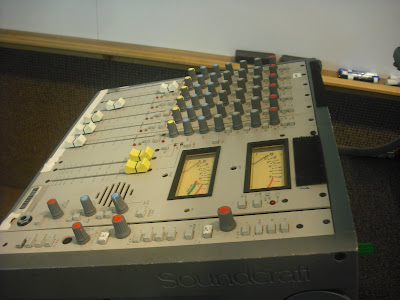 Today we began with our homework.

First off, the answer to the supermarket manager who won't turn off his Muzak is to shoot him. Yes, I was right! Actually, the location coordinator should be the one to be shot, because they screwed up by not securing the location early on during the scout with the firm understanding that they have to turn off their background music while filming.

Another option briefly discussed was the possibility of simply dumping the sound and re-doing the audio in post-production in ADR. But that's a very expensive option to ask the actors to come into the studio at a later date and try to recreate their exact delivery in sync with the video playing before them. It's not a very good idea, especially when you can dispatch the supermarket manager (if you have good aim.)

Then we discussed the script and the sound issues we'll likely encounter. Chat feels that our best bet for good sound is to use the boom mic whenever possible, and only going to wireless lavalieres when necessary. There are some interesting production difficulties in the script, such as a party with people dancing, which will require some kind of music. The party scene is long and has several cuts, so we'll likely have to film the scene without any music in order to not have jumps or gaps in the music or sections out of order in the final cut.

The device above is the sound mixer, which is the heart and soul of production sound. This is where the mixer will blend all the mics together to produce a viable sound to the movie. Anything that goes wrong here would be very bad, so we're all working to learn about using the mixer and how it works with the various mic options we'll be using.

Looks kind of rudimentary. Is that standard for a film sound mixer or is it a "starter kit"?

I think it's fairly standard for production sound, which is essentially a "live" mix. Our job is simply to deliver to the sound editor as clean a recording as possible. There just isn't enough time to worry about too many bells and whistles. That's what post is for, so I'm told.