First day of the shoot! I got there plenty early today, well before the call time. We were shuttled from the university parking lot up Mt. Carmel Rd to the location about 1/2 mile away.

When I got there I helped set up the "video village", which is a screened-in porch where the Sound Dept. people who weren't directly involved in the shoot (we split into three teams and each day one team is the "A Team") could listen in on headphones and watch on the monitor. Also we shared the space with the approximately 144 script supervisor trainees, or so it seemed in the very cramped and excessively hot space! Did I mention it was in the 90s today? 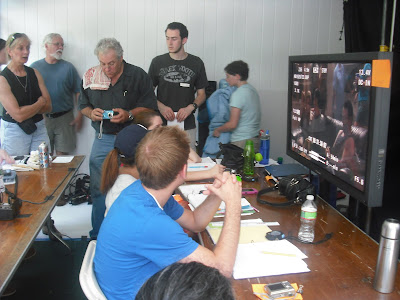 We managed to watch the monitor as the scene was shot, and we also took turns going inside and watching the Blue Team do their thing. We all couldn't go in at once because it was much too small a kitchenette the sound cart had been parked in. 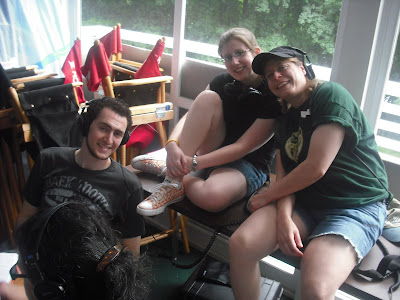 Daniel, Colleen, and Tracy all trying to look like they're not about to expire from heat prostitution (goddamned spell checker! I tried to spell "heat prostration", but you get one lousy letter wrong and it automatically assumes you want to talk about whores! Probably it's better not to draw any conclusions.) 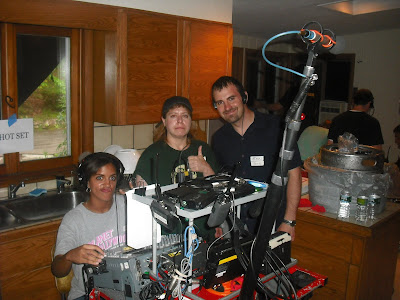 Samantha, Tracy, and Atanas in our ultra-luxurious sound suite, otherwise known as the "smallest kitchen in the known universe". 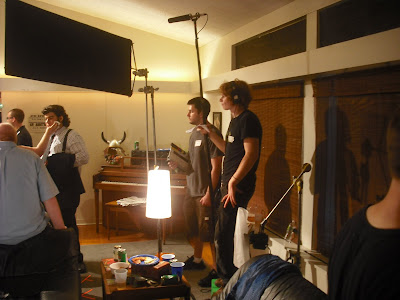 Patrick was booming the scene here, which is a party and has some pretty funny dialog. Pat did a great job miking the actors. 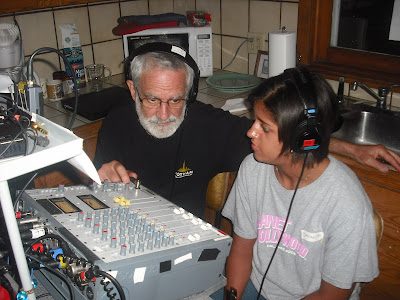 Chat gives Samantha some pointers about mixing the upcoming scene. Chat is taking a fairly hands-off approach to the movie, making us do nearly all the work. When this film is done, we'll all likely remember which scene we mixed. 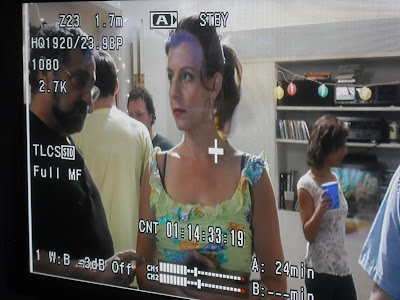 Leah, who plays the scheming Christine in the film, listens to Director of Photography Angelo Di Giacomo describe how the scene is to be filmed.

We ended up running about 1 1/2 hours late today, and we didn't get everything done that needed to be. But today was largely about set up and getting everything (including the 2nd camera that didn't show up until late) in place, and by late afternoon I could see the entire crew was getting into a rhythm. I'm sure tomorrow we'll make up for lost time and hopefully get back on schedule.

Despite the cooling rain squall that swept through around 2PM, it was very hot and physically tiring most of the day. But craft services provided some very acceptable fare, and Script Supervisor Virginia McCarthy thoughtfully provided a couple of trays of baked snacks, which were a big hit, so we got through the day mostly intact.

That's Day One of the shoot. Tomorrow we'll do it all over again.

Do your continuity people keep track of sweat marks so they can be re-created? No kidding -- isn't that going to be tough in post?

How long will the final product be? Published online?

They've been mopping the actors' faces before every scene, so hopefully there won't be a continuity problem with that.

The film should run about 10 minutes or so, and will likely be available online at the FITP website (this link brings you right to the page with last year's film, "Time's Up").