"FITP" meaning of course, the Film Industry Training Program. It was another intensive day of learning about the screen trade.

After only these few hours of instruction, I'm starting to realize that film making isn't merely a creative art form, but also a business that requires just as much planning and paperwork as any large corporation. And I've only been here about 10 hours so far!

Film making isn't just "Lights, camera, action!" Without Production planning and coordination, there wouldn't BE any lights on the set, no camera operators either, and the action would be totally non-existent.

Anyway, if it was easy, everyone would be doing it! 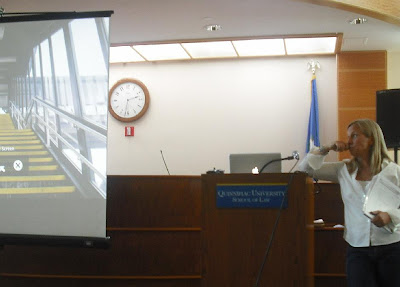 The afternoon session was led by Location Manager Maria Bierniak, (pictured) who gave us ridiculous amounts of information about location scouting and management. Plus, she told hysterical stories about stuff that happens on location. Such as her recent experiences working on Oliver Stone's latest film in a prison.

During a break I asked Maria about Stone's obsession with shooting in prisons, and we talked about Jane Hamsher's experiences while shooting Oliver Stone's "Natural Born Killers" in several prisons. Maria's crew shot footage on Riker's Island, which is only accessible via prison bus across the causeway from Queens.

I dunno about you, but I'd probably bring a swimsuit with me just in case something caused that bus to stop running!

Maria also showed footage of "Confessions of a Shopaholic", where they had to do a lot of modifications to the new Hearst Tower at 55th and 8th. I had a run in with that production and wrote about my experiences while staying at the very posh St. Regis hotel for work (yeah, I'm gonna miss this job) in a blog post here.

At the end of Day 2, I still can't believe how goddamned lucky I am to have a chance to take this course! Late today I got a call from my job, where I'm technically still on-call until next Tuesday, for a task in New Jersey. I explained that I'm taking a very important job-training course, and is there any chance they can assign the task to someone else?

Fortunately, they arranged for the engineer in Maryland to drive up and take the call. Whew! One more week to go, then I can really relax and enjoy this amazing school.

Tomorrow is "Cinematography" in the morning and "Sound" in the afternoon. Now we're getting into the real nuts and bolts of making movies. This is gonna be fuckin' awesome!