Another day of intensive training in the film industry. The morning lecture was provided by Angelo Di Giacomo, a camera operator who's worked on a slew of great films (click on any highlighted name to see their IMDB listing).

Angelo started the session with a documentary on the dangers of the excessively long hours many productions make their crew put in, often 16, 18, or even 20 hours in a day during a shoot. He then spoke about various issues such as creating a budget and interpreting the daily call sheets. 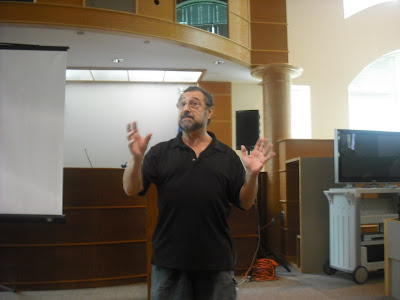 The afternoon lecture was by Chat Gunter, Sound Mixer for films such as Scorcese's "After Hours". Since I'm studying in the Sound Department, I was especially interested in what he had to say. 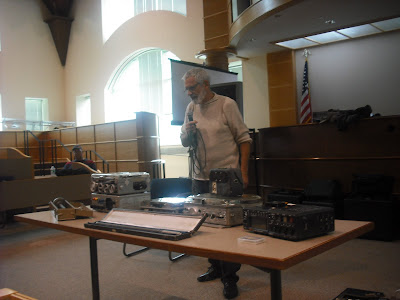 Chat began his lecture by displaying a history of recording equipment and talking about how he used them in films years ago. This was awesome, because I knew right away Chat was going to get into lots of practical knowledge regarding Sound.

He then continued discussing many useful facts about sound in movies, often peppering his entertaining lecture with funny anecdotes and occasionally snarky asides. Chat's a fellow with tons of experience and he doesn't hesitate to share it with his students. I think it's going to be incredibly interesting to work with Chat over the next three weeks.

I met a few more members of the Sound Dept. today, and sat next to an actress named Katherine Dickson, who just finished filming a role in the upcoming Angelina Jolie movie "Salt". Katherine is studying in the Wardrobe Dept. so she'll have some additional employable skills for those times when she's between acting gigs.

Which makes sense, since basically nothing seems to be permanent or guaranteed in this business.

Although there was some good news today! It was just announced that the huge Connecticut Studios complex up in South Windsor has been given the go-ahead, which will translate into many more job opportunities in the very near future! Artist's conception below: