Sorry it's been so long since I've posted anything interesting. I think that with this post, the string will safely remain unbroken.

"The Sopranos" just ended it's season with a whimper, not a bang, and "Entourage" is looking more and more like "The O.C." with naughty language (although I immensely enjoy Jeremy Piven's characterization of a sleazy Hollywood agent), so I thought there'd be nothing interesting to watch on HBO for a while. 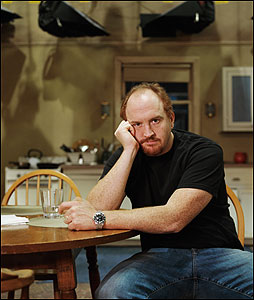 Then I caught the premiere of "Lucky Louie", the Louis C.K. vehicle that HBO just launched. It's wonderfully crude, raunchy, and foul-mouthed. Just the sort of thing that HBO lives for! Plus, it's got old-time, gritty "Honeymooners"-style sets, and is filmed with a live audience, which gives it a nostalgic, early TV feeling.

Jimmy Norton, as Louie's friend and a pot-dealer, is probably the creepiest looking character that's ever graced a sitcom, but then again, creepiness is part of Norton's charm. He has the off-putting look of a prepubescent serial killer, which makes Louie's character look quite respectable by comparison. And he gets to deliver the best lines (and by "best", I mean "most horribly offensive and hysterical").

I do have some minor complaints, though. The acting is of journeyman quality, and the writing can be punched up a bit, I think, but overall the effect is sort of like watching a bunch of talented amatuers put on their own show, and somehow manage to pull it off successfully!

Sorry to go off-topic today. This is a short personal message. Please read it and let me know what you think. Thanks!

I don't know how you feel about this situation, but I think there is a growing problem in our country. George Bush's presidency is becoming more and more unilateral in it's actions, either ignoring or bypassing the checks and balances of the Constitution. The Republican majority dominated House and Senate, along with an increasingly conservative Supreme Court, make it easy for the Bush/Cheney administration to do anything they want.

What is even worse is that so-called moderate Democrats are siding with Bush on many important decisions, like the war in Iraq and appointing right-wing Supreme Court justices. Joseph Lieberman is one of these enablers.

For many years, Joe Lieberman was a true Democrat, who believed in the principles of our government and the sanctity of the U.S. Constitution. But something happened to the man over the last three terms, and he's become an active participant in the erosion of our rights and the good standing of our government. His endless support of Bush's war is just plain wrong, and 2,500 brave American military personnel have paid the ultimate price for what is increasingly becoming an unwinnable and immoral war.

I don't want this country to go from one extreme to the other, not by any means. I'd like to see our nation make reasonable decisions regarding our security and our economy. But it's important to realize that by supporting Bush and his deliberate misuse of the public trust, Joe Lieberman is complicit.

There is an alternative. His name is Ned Lamont. 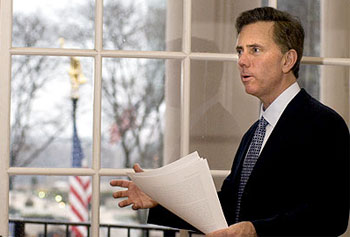 Ned Lamont has watched the decay of our great nation's standing because of Bush/Cheney, and he decided that it was time to do something about it. Lamont has selflessly volunteered to challenge Joe Lieberman, and help get the nation back on a middle course. On August 8th, Connecticut registered Democrats will go to the polls and choose our next Senate candidate. And whoever wins, he will easily defeat the Republican challenger in November.

But Ned Lamont can't do this alone; he needs our help. Here's what you can do:

* Be sure you are a registered Democrat, and vote on August 8th.
* Please donate by clicking the sailboat graphic to the right of the page.
* Go to www.nedlamont.com for more information.
* Volunteer at the website to help the campaign.
* Feel free to contact me to discuss the issues.
* Visit my political blog "Connecticut Bob" to see the latest news.

We can win this. We can turn our nation around and begin to fulfill the intentions of our founding fathers. We can ALL make America something to be proud of once again.
Posted by CT Bob at Friday, June 16, 2006 5 comments: