How CAN'T this be a great movie?

Bob Saget wrote and directed this movie. A slew of great actors and comedians do the voices. And it has PENGUINS!


"Farce of the Penguins", rated R (how do you make an R-rated PENGUIN movie?!?) "What happens in Antarctica, stays in Antarctica".
Posted by CT Bob at Tuesday, October 31, 2006 1 comment: 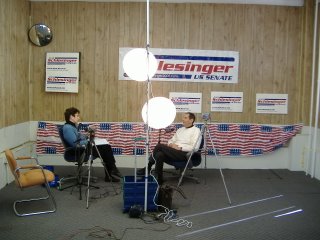 This was my first properly set up two camera shoot. I chose the use the traditional dual "over-the-shoulder point of views".

I used my camera and mic on a mic stand, and I set up my two China lamps to provide additional light, then set up Spazeboy's camera and mic stand, wired both mics into a dual jack then plugged them into my camera, and started both cameras and let Online Journalist Pat Carroll take it away. (And she did a fantastic job!) 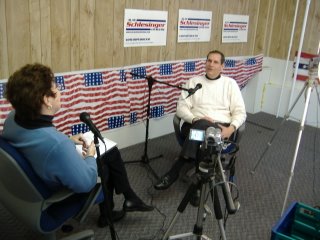 I edited the two tapes for a good seven hours last night before uploading it to Youtube. It was a learning experience on how to edit a two camera shoot. The important thing was to run both mics into the same camera, and use the "B-camera" only for video. 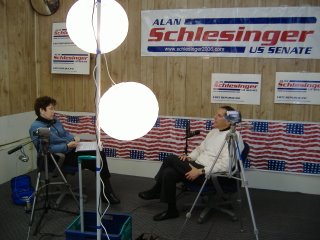 It helped that once I started both cameras, I let them both run non-stop for 55 minutes. Once it was synced on the editor, it stayed synced for the entire length.

I used Pinnacle Studio v9.43 for PC to edit it.

Once I got the process down, it got easier. The main thing is to have the two cameras running non-stop, and use a clapper board (or clap your hands) to sync up the two tracks. I had to shave frames to get them perfectly aligned.

Here's the interview...it's 24-minutes long, but you will pretty much see in the first 2 minutes how it looks and sounds.

Video of the Senator about the Speaker

This one made some news. My question to Senator Lieberman about House Speaker Dennis Hastert. See this article, for instance.

I learned how to import wmv files into Pinnacle, and created a coherent narrative using freeze-frame images with text asides. The repeating use of video clips helps enhance the message also.

The media that was there, including Fox-TV and Swedish TV-4, finished their interviews and turned away when I started asking the senator my question, and they were immediately back to catch his reply. You can see the Senator turning to his right to better frame himself for the cameras.

I'm back to discussing movie making

I'm going to start posting my campaign videos here, since this blog is primarily a filmmaking site, and all of the elements of creating videos are addressed in the clips I produce. I'll keep the political banter to a minimum; check out Connecticut Bob for all the campaign talk. Here we'll discuss the actual creation of the videos.

Here's a fun little video I made yesterday to encourage people to volunteer for the campaign. Since I started working with video blogging about 6 months ago, I think my skills have gotten a lot better.

I now realize that I really enjoy working with music and time compression/expansion. The hallway scene looks especially theatrical (with an obvious nod to Quentin Tarantino) and I'm going to remember that location if I ever need a really cool looking hall.

Watch it and comment on it if you want.