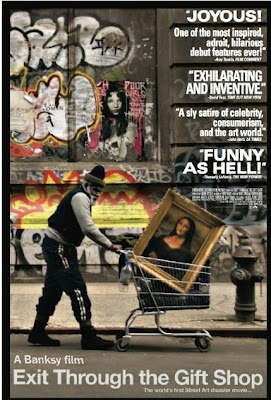 I just watched this documentary about street art and the artists that create it. And I'm just trying to figure out...

Who exactly was the joke played upon?

SEMI-SPOILERS BELOW, DON'T READ IF YOU WANT TO EXPERIENCE THE ENTIRE FILM:


This is a very nicely-made documentary/narrative about graffiti/street art, but the final third of the film sort of blows everything up out of proportion...to the point that it reminds me of all those movies that pass off mediocre creativity as "art", always to extraordinary effect.

If you haven't seen any of these, they each basically have someone create some "art", and then everyone in the movie goes totally nuts over it, until the audience is bashed over the head enough to suspend disbelief and agree that it's really art. At that point, the plot can move forward.

This is kind of the feeling that I got from this film, especially toward the end when Mister Brainwash (the artist) opens his first show to wild success in Los Angeles, selling over a million dollars worth of art that obviously is a blatant Warhol rip off.

Several well-known street artists are connected with this film, such as Banksy (whose face and voice are disguised as if he's commenting on how he stole money from the Mafia or something) and Shepard Fairey, who created that iconic Barack Obama poster that was everywhere in 2008.

The idea that it was a joke is obvious, especially when the director is listed as Banksy himself. The guy is a street artist, not an international spy. I'm sure plenty of police departments already have his mugshot available, as pretty much every street artist has been hauled in at one time or another. The hidden face gimmick is surely a joke.

Anyway, the supposed success of the show indicates that the joke was played on L.A.'s cultural community. If the show was as big a success as they said, then that's the point of the movie.

Anyway, it was a good movie, and for fun check out the message boards on IMDB for "Exit Through The Gift Shop". It's great entertainment to see the debate raging endlessly.
Posted by CT Bob at Wednesday, February 23, 2011 No comments:

I was wondering how he dealt with the cold... until I saw the bit where he chugged a bottle of vodka.

This is a video I found that looks at creating the sound scheme on "Black Swan". It focuses mostly on post-production and re-recording, along with the sound design. Fairly interesting.