So THIS is live TV!

Tonight, Ant, Chad and me drove up to Wallingford to be in the studio during this week's live episode of "Table For Two", the show-biz talk show hosted by "Death Knocks" alum Michael Buckley and Kristin Baltramaitis. 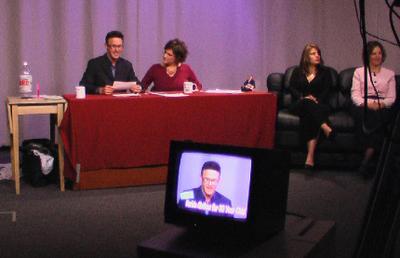 Michael and Kristin's show is a fast-paced Hollywood gossip fest, peppered with loads of one-liners and bawdy references. Along with humorous quizzes, top-5 lists, and pictures of the celebrities they're talking about.

Michael and Kristin have wonderful chemistry. The studio "audience" of maybe a dozen friends and acquaintances were kept laughing and clapping by the host's wickedly funny antics. They do this LIVE every week, and it's an HOUR-LONG show! I don't know how they manage to catch their breath!

Ant and I are going to try to sponsor the show for broadcast on Cablevision Bridgeport at Sound View TV. Normally, they require 4 week's worth of shows in advance to get into the lineup, but because the show is topical (it refers to the previous weekend's top movies and TV shows) we have to try to get it rebroadcast by later that same week. I'll try to talk them into accepting the DVDs of the show, produced on Mondays, for broadcast on Thursday or Friday. That should be adequate for the DVDs to be gotten to the studio.

If they want to be nice and helpful, that is.

Hey Bob!
Thanks so much for posting this! It was so nice of you guys to come down! Hopefully, you'll see us in Bridgeport soon and hopefully we'll see your show in Wallingford soon!