After a week of major work and hectic political events, some people might enjoy having a nice Saturday morning in which to sleep late and maybe read the paper and have coffee in bed.

I'm obviously not "some people". 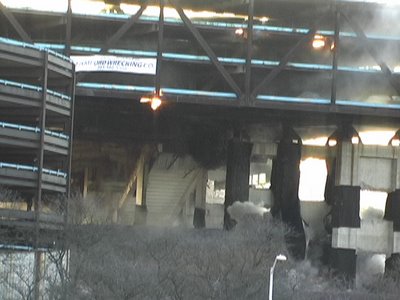 Because I happen to think it's a swell idea to wake up at 4:15AM and get dressed, then hop in my chilly car for a nighttime journey to New Haven. To shoot video of the New Haven Coliseum implosion.

Yes, it's obvious that I was dropped on my head as a toddler.

Technical Stuff: I used two cameras for the shoot; my Panasonic GS-150 handheld and zoomed in on the lower level, and the Canon GL2 on a tripod set to capture the entire field of view. When I edited the video below, I used the audio from the Panasonic, because the Canon's built-in mic is actually a pretty good directional mic, and it didn't capture everyone's comments and yells as well as the Panny. The Canon mic is great for taping someone speaking, but if you want to capture the ambience and sounds off-screen, the Panasonic does that better.

Anyway, back to the Coliseum and my pathetic teenaged memories. I've loved the New Haven Veteran's Memorial Coliseum since I was a teenager in the '70's...when I've spent many an evening watching a Steve Miller concert, or Bachman-Turner Overdrive, Queen, Foghat, or Jethro Tull. I even saw Abba.

Hey, it was the '70's...we didn't have the musical choices that the kids have today.

So it was a bit sad and nostalgic to see the ol' coliseum come to its end early this morning.

And yet, when I consider the awesome rock shows I've seen there; Ozzy both with and without Black Sabbath; Aerosmith; Stone Temple Pilots; and many, many more...I think, maybe this WAS a fitting end.

It's always better to go out with a BANG than a whimper.

WAY PAST COOL!that is the coolest!

Thanks! It was totally worth waking up early for it.

When it first blows,a few birds get off,are they pigeons,just wondering if yous had them?

Probably they were pigeons, but I did see a few seagulls flying around also; the building is (was) about 1/2 mile from the harbor.