Finally, here's Richard Kelly's long-awaited "next movie"; his apocalyptic vision of the near future.

This futuristic fantasy stars Dwayne Johnson ("The Rock"), Seann William Scott ("Stiffler" from the American Pie movies), and Sarah Michelle Gellar ("Buffy") in what has been called a train wreck of a movie. 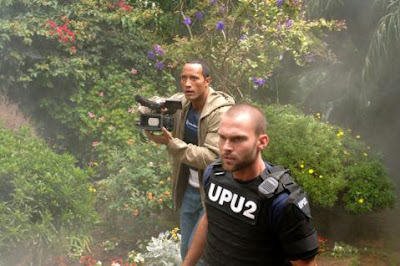 Dwayne Johnson and Seann William Scott
I wouldn't be so quick to dismiss it, though. Yes, I thought the script could have been better. "Donnie Darko", Richard Kelly's breakthrough movie, was subtle and engaging. Southland Tales is obvious and distracting. It was reminiscent of "Buckaroo Banzai", which was fun, but very "noisy" in the sense of a lot going on all at once, and you really needed to pay attention to follow it.

Which could have been good, except that most of the distraction wasn't germane to the plot. And the obvious laziness of the script was off-putting, with way too many "nods" to other films, inside references, and outright thievery in the writing, including Kiss Me Deadly, Repo Man, Mulholland Dr., Blade Runner, Buckaroo Banzai, Kelly's own Donnie Darko, and many others. I dunno, but these obvious references tend to take me out of the story and remind me that I'm watching a movie. 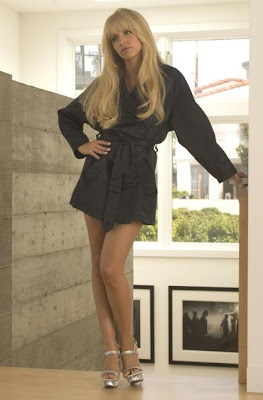 Sarah Michelle Gellar
The casting was a bit obscure. Dwayne Johnson has a solid career ahead of him as a B-movie action star, but his character in ST required a bit more depth than he could dredge up. Sarah Michelle Gellar seemed to warm to her role as the movie progressed. And Seann William Scott handled his unnecessarily repetitive lines with competent aplomb. A slew of former Saturday Night Live performers rounded out the cast, with a few notable exceptions. Wallace Shawn, Jon Lovitz, and Miranda Richardson were also used to some effect.

Visually, the movie is quite stunning. The world of Southland Tales is strange and awesome, but also unnecessarily confusing at times. This movie cost $17 million to make, and I wonder what it would have been if they spent around $30-40 million on it? A bit more script development and a few different actors could have made this film a huge off-beat hit. As it is, I think this film missed the mark, even though it showed the mark clearly and I get the feeling it could have hit it if it really wanted to. 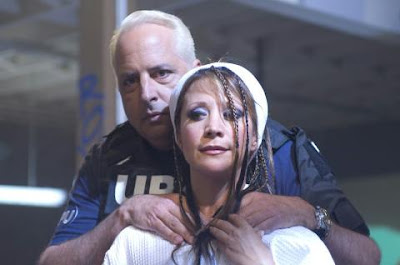 Jon Lovitz and Cheri Oteri
When the DVD comes out, it'll be recut and have enough extras that it'll probably show a decent profit. Despite it's flaws, Southland Tales is destined become a sort of cult movie, and it will most likely flourish in it's second life as an intriguing DVD.

And maybe Richard Kelly will learn from it and create another movie with the same visceral impact that Donnie Darko possessed.

I watched this and thought it was awful,and Dwayne Johnson's coke eye's were something else?

It wasn't a very "user-friendly" movie, that's for sure. You have to be a bit of a Donnie Darko fan to enjoy this flick, I think. And yeah, the Rock was a strange choice for the lead.

But then again, they only had a $17 million budget...these days, that's almost considered a "low budget" movie.

Dwayne Johnson and J.Timberlake are surprisingly talented actors; but i'm still trying to figure out what Southland Tales was about... maybe it's really obvious, i.e. life in Los Angeles is blurred, cluttered, flashy and not always meaningful.