"Hollywood East" to locate nearby 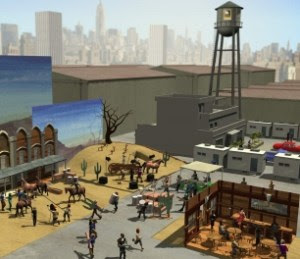 I can almost see it from my house. A new digital movie studio is going to take advantage of Connecticut's film business tax breaks and move into an empty military industrial site in Stratford.

STRATFORD — In the town where the once thriving Shakespeare theater put Stratford on the map as an entertainment showcase, a New Haven film and multi-media production company is planning to do it again by creating "one of the largest studio complexes in the United States" at the former Army Engine Plant site on Main Street.

Hollywood East/Area 51 was unveiled Monday by the U.S. Army and General Services Administration as the company that submitted the winning online bid last month of $9.6 million for the 78-acre contaminated waterfront property now known as Point Stratford, and the company formally selected to redevelop the site.

The property, which borders the Housatonic River and is across the street from Sikorsky Memorial Airport, has been dormant for 12 years, but is considered the key to Stratford's economic redevelopment.

After numerous failed attempts to develop the parcel, which was the site of defense manufacturing for decades, most recently engines for Army aircraft, the U.S. Army intervened last year just as the Town Council voted to sell the property to developer Monti-Posillico of Long Island.

"We are very excited about Point Stratford," Allen Christopher, president of Hollywood East, said Monday in a prepared statement.

The place is literally three miles from my house! This is gonna be great!
Posted by CT Bob at Tuesday, April 15, 2008

Hollywood of the east, hmmm. Still not exactly east is it!

Well, it's not like that called it "Bollywood" East, right? LOL!