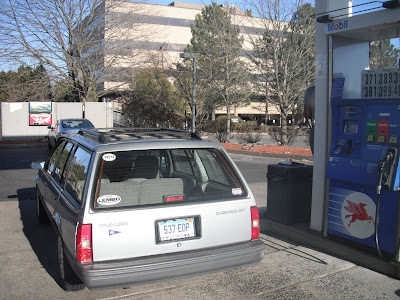 This may look like any old car parked at a gas pump, but what you can't see from this photo is that it's MY old car, and it's LOCKED with the KEYS still in it!

On my way to a video gig last night I stopped to fill up, and I stupidly locked the car because I had all my camera stuff in the back seat. When I went into the mini-mart, I mentioned that I locked the keys in, and an older fellow suggested I call the local police and see if they'd open it.

I thought they discouraged that sort of thing these days, but I gave it a shot. Surprisingly, they did dispatch a squad car to help out, possibly because I told the dispatcher that I was blocking a pump at the gas station and I wanted to get the car moved to allow them to do business (they did have 8 pumps at the station, so I don't think it really caused them much harm).

Officer Darby showed up, and had the little flat tool that car thieves everywhere have used for years to pop the locks on older cars. The newer cars are more theft-resistant, but my 1994 Chevy wagon was a bit more agreeable to thievery. Working together for about ten minutes, we managed to pop the passenger side lock and, after thanking him profusely, I was on my way to the gig, and got there in time to set up and shoot the video I needed.

I don't know if I'll add this skill to my resume, but it's always good to know that I have a new career option if I want to get in the business of stealing crappy old Chevys!
Posted by CT Bob at Sunday, March 27, 2011