Last night we transferred the mini-DV footage from the final day's shoot onto DVD and VHS. There's a total of maybe 170 minutes of footage for our 10-minute short. We've got a LOT of great scenes with our actors, plus a bunch of freakin' hysterical moments for our blooper reel!

Here's James looking very creepy in his costume. Eat your heart out Bergman! 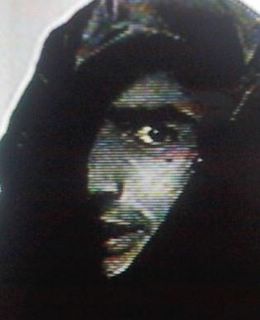 Below, Michael emotes terror for a big scene. Check out how the wide-angle lens makes the walls curve; I think it looks really cool and helps convey the feeling of anxiety that the scene contains. 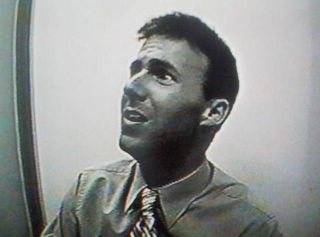 We're trying throw together some quicky TV shows for broadcast on Public Access, because once we have 4 or 5 shows done, we'll "graduate" to the bigtime editing suites and be able to use Premier to edit our flick.

I've got about an hour of sailing footage I'm going to staple together to make one or two 24-minute shows, and hopefully get them scheduled for broadcast in a few weeks. Ant taped an Hispanic festival last weekend, and he's trying to cut that for another show. Plus, my friend Lori has gotten her cooking show nearly done, and I exec-produced some of them, so they'll count as "my" shows when they're broadcast.

With luck, we'll be able to meet the minimum requirement shortly, and have the luxury of working with the high-end editing equipment. We owe it to our actors and ourselves to do a great job with our movie.
Posted by CT Bob at Tuesday, June 07, 2005

You're an entertainment juggernaut, Bob. I'll be able to say I knew you when.

BTW, nice changes to the site, I heartily approve.

Why, thank you, Jane. To be completely honest, I'm honored to be able to say, "I know you now!" Your encouragement really counts to me.

Glad you like what I've done with the place...it's amazing what a fresh coat of paint and rearranging the furniture have done for this old joint. I hope you get a chance to see the new addition I've built...it's over at www.sailfulltilt.blogspot.com

One doesn't live by filmmaking alone...especially when the weather's nice!

Hey!!! Looks nice around here!!! So will you remember us little people when you're famous, Mr. Bob?

As long as you continue reading my blog Cherry Moon, I already feel famous! Glad you enjoy reading this silliness; I like reading your blog because I know eventually I'll find something that I'll write into a screenplay.

LMAO! Pick a moment... any moment. My entire life should be a sitcom. LOL!