.
We just got back from Vermont, where Joyce and I took a couple days off from work to ski. 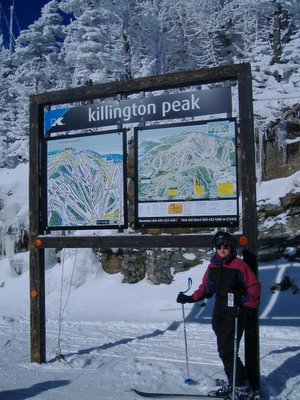 Here's Joyce at the top of Killington. It was cold; only about 5 above that day. And that's Fahrenheit, fella'! None of that European centigrade crap here...it's AMERICAN degrees, or NOTHING for me! 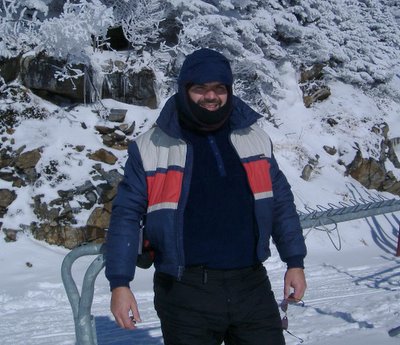 This is me, just a few moments later. It's still cold. Can ya tell? What happened to my gloves, anyway? 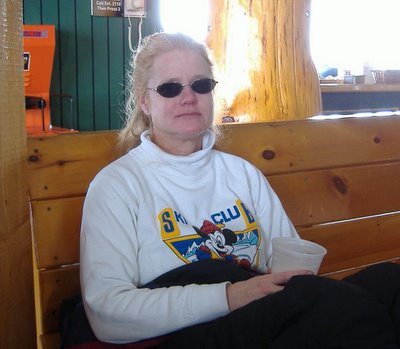 Joyce is enjoying a lunchtime beer in the sweltering heat of the summit lodge. Yeah, it was warm enough in there to require a beer, even though it was frigid outside. Plus, they had a fresh-grilled hotdog platter, with two dogs and a large order of fries, for $8.95. I've eaten at dozens of ski lodges, and believe me, this was a phenomenol deal. It was enough for the two of us (plus 11 bucks for the brews).

The view from the lodge was amazing, but the batteries on my digital camera crapped out just then, so you'll have to take my word for it. Or you can go there yourself and see. Either way, I don't care. Just so you know.

The next day, a little sore from our woeful lack of physical fitness, we hobbled over to Pico Mountain. It wasn't much warmer, but we got a couple inches of snow the previous night so we enjoyed a bit of powder skiing. Pico has some great steep, flat runs, where you can really get the wind roaring in your ears. If your ears weren't completely covered, that is. Because mine were. But I knew the wind WOULD have been roaring, if I could hear it.

We're home now, and after two days of wicked awesome skiing we both have some extremely sore leg muscles. A little while ago I was sitting here in the den and was able to determine that Joyce was walking down the stairs, because I could here her going, "Ow...ow...ow...ow...ow..." etc. I'm similarly afflicted, but a bit of scotch to wash down my Advils, and I'm feeling better. 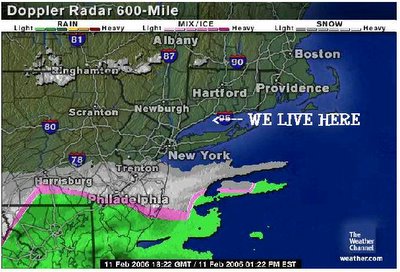 Apparently a massive Nor'easter is careening up the coast, and all the local TV stations are predicting a blizzard! Not a chance of snow, or even a winter storm, but a BLIZZARD. It should hit later this evening. If you don't hear from me by tomorrow night, send out a search and rescue team. And make sure they have a reasonable supply of beer with them.