One is soon to start it's new season, and one may be gone for good. 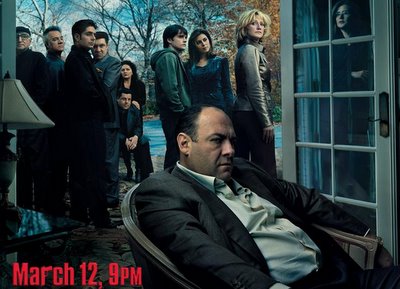 First, HBO's "The Sopranos" will begin it's sixth (and final?) season next month. This is one of my favorite shows. The writers so far have done a pretty good job, although there have been some unresolved loose ends from prior seasons. If this is the last season, you can pretty much count on a lot of wiseguys getting wacked; including T. himself. You just know there can't be a happy ending to this series.

And then there's "Arrested Development", the oddball sitcom that recently finished it's third (and probably last) season. Which is a shame, because the writers of this show were pretty much given free reign to be as wacky and outrageous as possible. Perhaps the show never gained a popular audience because of the frenetic pace of the jokes. And the fact that there's so much going on at any particular time that the typical American viewer (who's used to being spoon-fed the plot and having the jokes all but diagrammed for them) can't keep track.

There's some talk of the show moving from Fox to Showtime, but it's a longshot. Fox has already passed on renewing, so we may have seen the last of "Arrested Development". At least there's the DVD box sets of season's one and two available, and almost certainly we'll see season three sometime soon.
Posted by CT Bob at Friday, February 24, 2006