At some point I'll get around to this

Things have been crazy busy for me lately...I'm heavily involved in the Ned Lamont campaign for U.S. Senate, and this coming weekend I'll be covering and taping the State Democratic Convention for the blogs, including "Connecticut Bob". But there's a project I've been wanting to get to for a while.

Milford, the town in which I live, has a long and interesting history, dating back to it's founding in 1639. Part of that history is documented in paintings, drawings, and photographs, many of which are included in the collections of local historical societies.

Some of the landmarks featured in the old pictures are still around, and I've been wanting to take my camera and capture modern pictures of them, from the same point of view as the original photo. Then I'd work that into a historical documentary about my town. 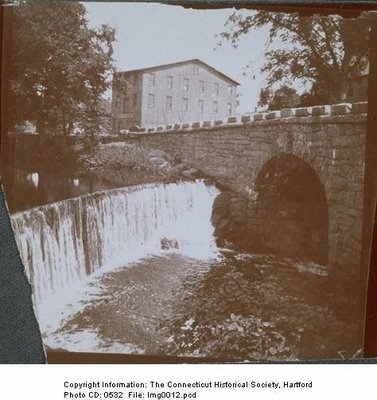 This is the Memorial Bridge downtown, photographed in the late nineteenth or early twentieth century. 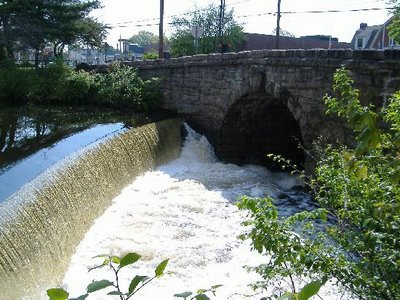 Here's the bridge from roughly the same perspective, this morning. The rushing water is a result of the record rainfall we've been having in New England this week. The sun came out today, so I detoured from an errand and took this photo.

I'm thinking of using maps, reproductions, the new and old photos, interviews with historians, and period music to tell the story. It's an idea that I'd really enjoy doing.

All I need to do this is a little research, an interview or two, and some spare time.

Ah, that is so cool - that's just the sort of project that appeals to me! Before you know it, you'll be desperate to find out what happened to that old building that stood over the road behind the wall!

I already know, but I ain't tellin'! LOL

Actually, I think that's the old mill on the site of our present library.

The fun part is going to be using the old maps to point out landmarks. There's currently a big controversy about the location of a proposed condo project because the remains of a bunch of Revolutionary War dead may be buried there.

They died from yellow fever after a British prison ship dropped them off in Milford in the middle of a cold December night. Because the disease is so contageous, they were buried in a mass grave, the location of which is being investigated.

That's so cool,i love all that,i onece published a pic of Bootle Village that was from the 50's,and like yours,hadent changed much?