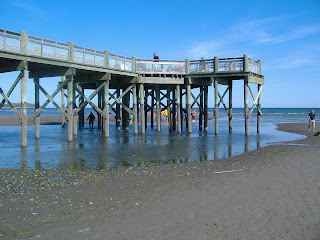 My dad called me yesterday and said there was a big film crew down on the pier near where he lives, and suggested I go down there and see what's up.

So I drove to the beach in my 1987 Dodge Aries K sedan and saw a bunch of production vehicles parked in the lot. I got out and walked over to the pier. There were a couple of guys standing near the entrance to the pier, so I walked up and asked what was being filmed there. 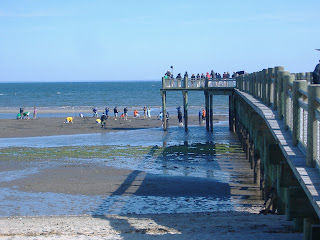 "Fair enough," I said, and noticed a group of large, like, REALLY large people digging in the sand flats next to the pier while being filmed. I remembered my wife telling me about a newspaper story describing a reality show where fat people were in a walking race from Boston to Washington, DC, and along the way they had a bunch of challenges/contests.

"Yeah," said Steve, "And they're digging for clams." 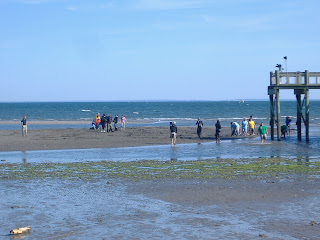 I looked over at them. They were some BIG people. I joked, "Hey, maybe I should see if they need another contestant!"

Steve looked at me and said, "You're not that fat!"

Hmmm, I thought, that was quite a left-handed compliment. By saying I wouldn't be accepted, he basically agreed that I was fat; but not SO fat that I would qualify for a reality TV show about fat people.

I'm still not sure how I feel about that...but I AM thinking about going on a diet! 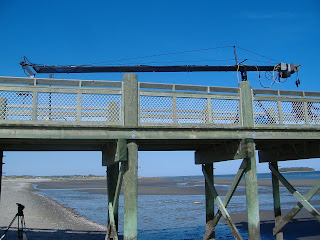 They had a massive 16' crane on the pier, which is a nice piece of equipment. I tried walking down the beach to check out the filming, but several production assistants quickly materialized and asked me not to take pictures. I snapped a few quick ones anyway, but I didn't want to upset anyone so I didn't make a point of arguing.

The contestants slogged their way back from the sand flats, looking exhausted after digging on their hands and knees for clams. Some had mesh bags of clams in tow.

I asked Steve about the challenges. He was good and didn't reveal much, but he did say that they had to compete to see who got the most clams. And that they DID bury some live clams ahead of time on the flats. There was a scale hanging off the pier to weigh them for the cameras. 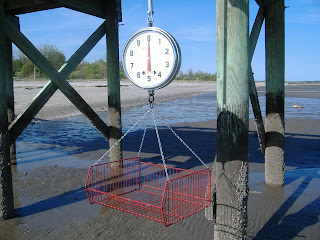 Which made sense, because those people were collecting huge amounts of clams in a short time. Probably anyone who wants to make a clam-killing can rake the sand today and get a decent haul.

hey there can u email me at eokeefe25@aol.com

my boyfriend is on this show and i wanted to hear more about what you saw! we have no contact with them what so ever when they are out there, so finding things like this is a relief!

My wife was out there, she is the one with blond curly hair. Like the other comment we are allowed no contact with them so if you have any comments or pictures that you can email to spaceplanner2@yahoo.com it would be greaaaaaaaaaaatly appreciated.

Sorry, but those were the only pictures I took. They did walk past me after the clam digging ended, but I had three PA's surrounding me and I didn't want to be a total pest by taking pictures of them.

I hope your folks do well in the race.

Just to let everyone know, that he was not talking to Steve, the Co-Host/Trainer. (just to clarify)

Can you tell me what pier that was. (maybe on a map) I was looking on google map and I'm not sure which pier you were photographing.

I'm just trying to pinpoint on a map where they were for friends and family.

Thanks for the post! I'm going to link from my blog if you don't mind :)

And to whoever was asking ... go to Google Maps .. look for Milford CN ... then zoom in to see Gulf Street and Old Field Lane. You'll see a "T" shaped pier off the beach there. That's the only one I could find on their satellite view. Hope that helps!

My Best friend is also on the show. I wish I could track them better! I am online everyday looking for articles etc. Thanks for the news!

Actually, the pier is a new one, located about 1 mile west of the Gulf Beach one. Go to maps.google.com, search for "walnut beach, milford, ct" (not "CN"), and zoom in on the T-shaped pier. That's where it was located.

Holy cow, this blog is getting a lot of hits. I wonder what my traffic is going to be like next month when I have pictures from the New Haven chase scene in the new Indiana Jones movie?

Ah ha! I see it! Thanks so much Bob! It's amazing .. I'm averaging 300 hits a day right now - and 80% of them are people looking for information on Fat March. It's crazy!

So .. Indiana Jones - huh? I might have to come back for that one.

Of all the "Fat March" contestants, I like the blonde curly one the best. I went to her website and found out she is quite the singer! After listening I had to download some of her songs. They were really beautiful.
If you want to check her out it's www.wendywright.biz or www.myspace.com/wendyalanewright

Not fat enough? Ha! Ha! I guess you should have ridden your bicycle rather than driven the truck down to the pier!

Lost your link when my laptop packed up a while back - picked it up again through Gaz at Sefton Taxis.

Byron! Great to see you, buddy! I like the new Sefton Taxis site; very cool looking.

I'm good friends with Steve Pfister the co-host. He is actually my wifes trainer here in Vero Beach Florida. He is a great guy and a good friend I hope the show does well. Here is a link to his myspace page http://www.myspace.com/1spaguy

That's cool; as long as everyone is aware that the Steve I was talking to wasn't the co-host; he was a PA, I think.

I don't want to blow up either Steve's job, and I probably should have just made up a name for the guy I talked to.

So, either Steve - sorry if you got any flack for this; not that you revealed anything important...it won't hurt the show's viability to know there's a "clam episode"!

That's cool that you care...about both Steves...and the integrity of the show. Some people could care a less who the walk over to get a bit of info. I wish you the best.

I just saw them walking the streets of New York. I can't tell how much they've lost, but they are a good looking group. They must be proud of all they have accomplished so far. I'll look forward to seeing the show.

Hiya Bob,did you see my cousin Joe their,he has a blue mohawk,wears a kilt and blue dr martins,bit of a FAT FUCKER (BUT THAT DOESENT MAKE HIM A BAD PERSON).............i would have have felt bad see'ing them diging for clams to eat,i would have bought them all a bag of doughnut's...

Hi! My husband is the other steve (co-host). I enjoy finding will articles and blogs like these since he's gone. Thanks for sharing. :)

Gazza, yeah I remember seeing your cousin! He said you still owe him ten quid, and he's going to kick your ass next time he sees you! LOL!

how do you join fat march