Another 10-hour day on location. We all got to do some cool stuff today. 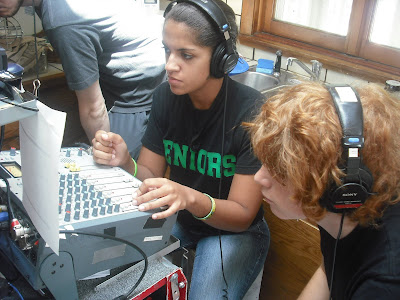 Samantha mixes a scene while Pat "thirds" for the Sound Crew. Thirding is basically a utility person/cable puller, who supports the mixer and the boom op. 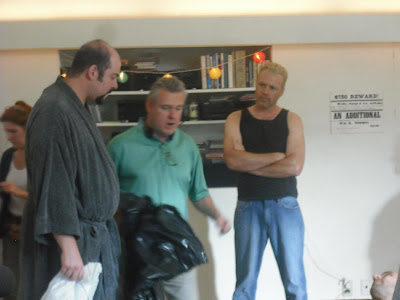 After lunch there was a scene that required Atanas to stretch out the boom pole about 12 feet to mic the actors. Usually it requires a bit of muscle to hold the boom steady at that distance. After a minute or so you start getting trembling in your arms.

Well, Atanas got to test his muscles because this was a scene where the director wanted to keep trying new things while keeping the cameras rolling. Meaning Atanas had to hold the boom over the actors the entire time without letting it dip into the camera frame, nor drifting too high that it loses the sound.

Which is all well and good if the scene goes for a couple minutes. But Richard kept tossing out ideas to the actors while the roll was going, and I noticed the timecode on the digital recorder creeping up past three, then four minutes, I began getting concerned for Atanas.

Then Richard ran through a bunch more ideas, and the timer hit six, seven, then EIGHT minutes (for a SINGLE take, mind you!) and I really began to worry. As soon as the director finally yelled "cut" somewhere just shy of nine minutes, I ran onto the set to help Atanas. The poor guy was soaked in sweat and clearly flayed, but he toughed the scene out and did an amazing job with the boom. It wasn't my turn to boom but I decided right there and then to relieve him. He was relieved all right, and the first thing he did once he was disconnected was to grab his water bottle and take a giant swig out of it.

I boomed a couple of scenes and did a good job, then went back to the sound cart to see where else I could help. We were well into the afternoon by then, and were on our way to finishing up the rest of the interior scenes. 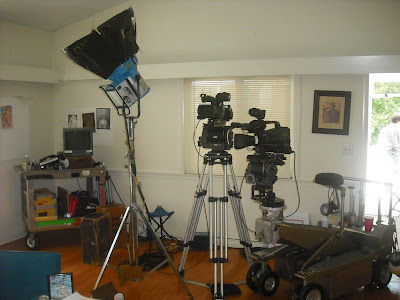 This is a shot of the living room set where a couple cameras were set up. We had an "A" camera and a "B" camera for many scenes, and that made it challenging for the boom operator because they had to watch TWO frame lines. 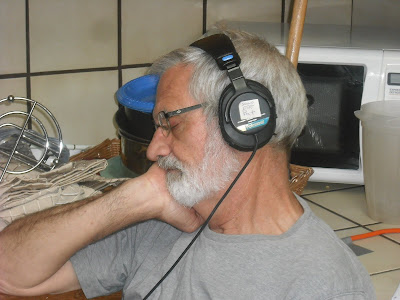 Our dear instructor must have had a taxing day trying to whip his sound crew into shape, because during some interminable delay waiting for the cameras to get ready for a scene, Chat rested his head on his arm and took a short vacation to snooze-land.

By the way, it clearly is weird how camera crews can take all frickin' day to set up and tweak their cameras to perfection, happily holding up production for hours if needed; but if the sound department takes more than two minutes to properly resolve a mic issue, they all look at you like you're preventing them from eating Thanksgiving dinner until it gets cold! I mean, c'mon guys, how 'bout a little respect for the people who invented the concept of "talkies"? If it wasn't for us sound-dogs, movies would simply be shadows moving on a wall.

Although, our Director of Photography Angelo DiGiacomo is very much a sound crew's kind of guy. He was very attentive to our needs when it came to video monitors, and the few times he needed to point out our mistakes, he did so in a very low-key and constructive way. He's a great guy.

Back to Chat's snoozing. The best part is when the flash from my camera woke him up! I didn't even know the flash was ON, so there were TWO very surprised people involved producing this photo. Thank god I didn't try to snap a photo while on the set; the director or A.D. probably would have killed me!

And I'd have deserved it, too.

Now I'm gonna get some sleep. Tomorrow is the final day of the shoot. No way do I want to be late!