The short film I worked on in September is seeking funds to complete it. This is an "epic" movie with tremendous production values, and it's going to look great on the big screen. I was the boom operator and utility guy, working with Josue Saldana. 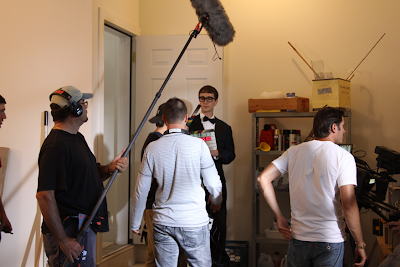 That's me holding the boom as we prepare to shoot a scene for the film. My accounts of the filming are located here:

Here's the fund raising page on Kickstarter. The way it works is you pledge a donation with a credit card, but you ONLY are charged for that amount if the project reaches it's funding goal by the set date. That way, you're not out any money for a film that might not have raised enough funding to complete it.

"Lover's Leap" has set as it's goal a very modest $4,000 by January 12th. So anything you care to donate will have a significant effect on the outcome. And on the Kickstarter page you'll see a bunch of really great incentives depending on what level you wish to pledge. You can pledge as little as one dollar (but c'mon now, that would be silly; toss them a sawbuck at least!) or as much as the entire amount.

My brilliant idea for an incentive was for any person who pledges the entire amount be allowed to sleep with the cast member of their choice, but the producers shot it down without so much as a how-do-ya-do! Prudes.

Whatever amount you decide upon, you should know that you'll have an opportunity to see this awesome movie sometime in early 2011!