Am I "Living In Oblivion"? 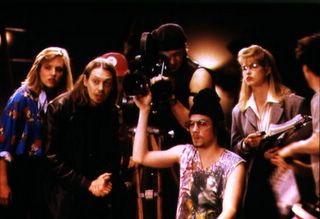 Cast of "Living In Oblivon" (1995)
I taped PGL last night, 'cause I couldn't stay awake beyond 10PM. I don't know if it's a good thing for me to be watching the latest episode of Project Green Light right now, less than 30 hours before our shoot.

It's kind of cool seeing elements of their movie that we're going to be using. It's like, "Hey, would ya look at that china lantern they're using? It looks exactly like ours!", or "Their lavalier battery pack is just like the one we're using."

In contrast, there's the stomach clenching pressure for them to stay on schedule, and the tension and arguments going on between director and crew. I worry that we're not going to get enough done in our limited time. That's my nightmare. I feel like Steve Buscemi in "Living In Oblivion". No wonder I woke up at 5AM this morning and couldn't get back to sleep! Tonight I'm going to pop a couple of Tylenol PM; that'll do the trick.

I don't know how this is going to affect the shoot, but it's going to rain like hell tomorrow. We're shooting in the studio, but we have actors driving in from 40-50 miles away for an 8AM call time, so I hope they don't have any problem getting here.

LOL!!! I don't need any more new things to worry about... but I have to say that I hope everyone gets there safely.

I hate driving in the rain.