Now that we're in production, Anthony wants to be able to post here, too. Since we're using the "FutureDV" name for our ersatz "production company", I guess its only fair that I allow him to have the occasional post here...rather than his sneaky anonymous jabs in the "comments" section. (Just kidding, buddy!) 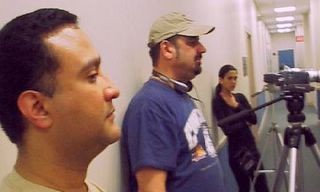 Anthony, Bob, Paulina, and the Panasonic camera
Other things that are noteworthy; for the rest of this project and all future movies, we're going to delagate someone to be Director of Photography. It's obvious you can't direct and be a DP without missing some things...there's just too damn many things going on during a shoot, and someone needs to concentrate fully on framing the shots, balancing the lighting, and operating the camera.

That will free up the Director to work with the actors and be creative. I know personally that there were some stage directions I wanted to give my actors but didn't have the time because I was busy futzing with the camera.

Also, I'm beginning to see the wisdom in the traditional structure of a film crew, and how important individual jobs are. You need a Sound person to monitor and balance the audio. You need a Script Supervisor to mark off shots and keep an eye on continuity. You definitely need Production Assistants to get you a cup of coffee when you're too busy. And you should have a big guy with a loud voice and a firm committment to the production to be your Line Producer, who, among other things, will keep everyone in line (not that that's the REASON he's called a "Line" Producer).

An Assistant Director would be helpful also, to pick up the slack of the Director and DP. At this level, we may be asking a lot for this many crew, but it's something to work towards.

Today we've been trying to schedule the next shoot date. Problem is, we won't have the studio for more than a few hours any weeknight next week, so we're trying to line everybody up as early as possible to get as much done as we can. If we can get a good three hours of production in, we'll be 90% finished. We're still hoping for Monday.
Posted by CT Bob at Tuesday, April 26, 2005