We finished casting our project today! YAY! We have two very talented actors for the primary roles, and we also have an actress who will do a funny cameo appearance, so we're psyched! More on casting later...

I also did some shopping. I picked up the costume, which we'll probably modify to enhance the effect we're looking for. Then I went to Home Depot and bought some stuff to make a "fog chiller". 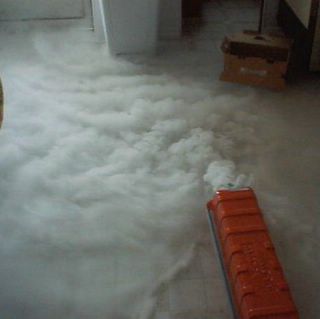 Basically, a fog chiller is some kind of long box filled with ice with a pathway for the steam to shoot through, cooling along the way. As long as what comes out of the box is cooler than the ambient air temperature, you'll get that cool ground fog.

A fog chiller is what you need to make "fog" creep along the ground like in those scary movies. A normal fog maching (Wal-mart, $20 around October) makes fog by heating up a special mixture of water and toxic chemicals. Okay, I'm not entirely sure about the toxic part, but let's just assume for the sake of argument that it will kill you if you inhale enough of it. You know, just like air.

Anyway, because the fog produced is basically steam, it tends to rise. That gives you a room filled with hazy fog that's really bad for photography, unless you're shooting the final scene in "Casablanca". We want that really scary ground-creeping fog that's pretty much mandatory for horror films, so I needed to make a "fog chiller".

Eventually the fog slowly rises as it warms up to air temperature, so you really need to be ready to shoot as soon as the fog is applied. If you want a second take, you need to completely air out the room or you'll have a hazy fog everywhere that will ruin the effect.

It works fine, and we'll use it, but we're going to make sure that the "fog" scenes are the last ones we shoot so we won't have to air out the set to continue.
Posted by CT Bob at Friday, April 08, 2005

Ok, I want one of those thingies.