Drove up to Hyannis for work today. Great trip. Had my MP3 player cranking, cruise control on, and a Cuban cigar puffing away. The sun was shining, the breeze was warm, and because of the Patriot Day holiday in Massachusetts, traffic was agreeably light. Spring in New England is something special. 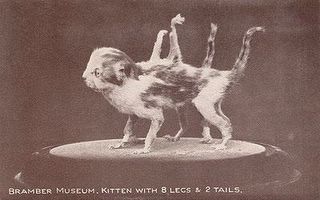 A Bizarre Looking Freak-Kitty That
I Posted Here For Absolutely No Reason
I really think there's something wrong with me for making you see that.

I'm sorry. I obviously spend WAY too much time surfing the 'net for strange and bizarre stuff.

Got back in time for the 6PM rehearsal at the studio.

We tried our dual mic setup with a camera, but it didn't work. The tech that gave us the equipment apparently didn't provide the right equipment, and the technical director was gone for the day. I'll have to call him tomorrow and find out exactly what we'll need to make it work.

The actor scheduled for tonight showed up promptly. We walked through the script with him, and while we didn't have the other actor there, we did get some good work in. Plus, he's willing to improvise and made some good suggestions.

And he's a funny guy. The script requires funny, and he's sure to deliver.

He also does physical comedy, which is great, but I have to keep Anthony reigned in, or he'll have the poor guy bouncing off the walls! I mean, I love physical comedy. I just don't want to have to splint a compound fracture because we were "shooting for laughs".

Tomorrow's another studio night. We'll try to get the audio issue resolved. I don't want to have to work it out the morning of the shoot.
Posted by CT Bob at Monday, April 18, 2005

Uhhh... wait a second.. you obviously haven't read about my hermaphrodite cat, have you?

Aw, c'mon, that's a cuddly lil' kitten there! Don't you just want to pick him up and give him a little nuzzle on the nose?

For the record, I'm not a cat person. I wish I was, because I've heard that cats sometimes survive like for WEEKS when accidently locked in a closet, and that's PERFECT for when we go on vacation! And if the cat doesn't make it, you can always hollow it out and make use of it as an oven mitt. What a great pet!

You'll have to point me to the post about your freak cat...I think I might have seen it, but can't remember.

Yes... you even made a comment on my blog about how you liked cats sauteed in garlic.

Ah yes, now I remember. LOL! That's a funny line...gee, I forgot all about it? Thanks for reminding me.