Someone tell me why this happens?

But I did have a nightmare this morning.

The dream went like this: I was at some kind of cool party somewhere in SoHo or Tribeca. It looked like we were in a trendy loft, and there were all these top level movie people there I recognized. I found myself chatting with a small group of actors and filmmakers.

Among them was one of my film heroes, Robert De Niro. Somehow, the subject of screenwriting came up, and even though I was WAY out of my league with this crowd and should have just kept quiet, anyone who's been reading this blog for any length of time has to know that reasonable discretion isn't an instinct I possess. So I mentioned that I was writing a screenplay for a feature I was planning to shoot. 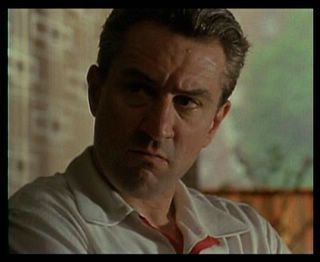 "You talkin' to me?"
Everyone stopped talking and looked at me. Bobby De Niro (hey, I'm at the party, so I figure I can refer to him like he's a good friend) stared at me with his "I'm gonna whack this fuckin' guy" look from "Goodfellas". I broke out in a cold sweat. Any second now Joe Pesci is gonna shoot me in the foot, I just know it!

De Niro says, "Well, let's take a look at it," and motions for me to give it to him. I'm panicking, since it was only a rough draft, and I knew there were lots of things I wanted to change. But how do you say NO to Bobby D?

Apparently I had a copy with me (Jeez, who wrote this dream, anyway? There's no way I'd EVER carry around a first draft of a script where someone might see it!) and I reluctantly handed it to him. With horror, I watched as he read it. He flipped pages, grimacing and making growling statements, like "Are you serious wit' dis shit?" and "You gotta be kidding me!". It was awful!

He gets to the end of the script and holds it up for the group, saying "This fuckin' sucks!". I'm completely mortified! Then he says, "I think maybe I can fix some of these problems here." He starts going through the script, making changes with a pen. He comments on the dialogue of scenes that I fully intended to revise, and without listening to me he makes modifications. I'm trying to object, saying I was going to do that, but he ignores me and continues.

Finally, he finishes, and says "Now you've got a script that will make a good film." I'm totally humiliated, because he never gave me a chance to finish the script, and now I don't even want to shoot it, because it's not MY script. His friends applaud his screenwriting skills, and they detach themselves from me so fast that it's like I'm suffering from an uncontrollably vicious public attack of irritable bowel syndrome!

I woke up angry and disappointed. Angry with De Niro for fucking with MY script, and disappointed with myself that I didn't have the finished version ready for him to read. But honestly, I didn't expect anyone to want to see it yet!

(sigh) I wonder if these friggin' anxiety dreams are a part of the filmmaking process? Because it's exhausting to wake up freaking out several times a week! Did Kubrick ever have to go through this kind of shit?
Posted by CT Bob at Thursday, April 28, 2005

Wow! That dream sums it up pretty damn well, if you ask me! You're nervous, you're anxious, you're worried about rejection...

I should be getting paid for this, yanno.

I keep dreaming that my teeth are falling out. Someone said it's because I'm sexually frustrated.

Sexual frustration makes your teeth fall out? It's a miracle I don't have dentures then! LOL!

(if my wife reads this: I'm just kidding, dear!)

I've read somewhere that dreams about teeth falling out are an archetype for old age and death. Seems that it's wired in our psyches that we associate losing teeth with becoming old and infirm. (Was that C.G. Jung who mentioned that?) Makes sense, actually.

There's actually a website that interprets dreams. OF COURSE! I'll have to come back and give you the web address.