It's quite strange watching Project Green Light. Those people are going through the same stages that we're currently experiencing. Watching bizarre director John Gulager deal with things like going over schedule is kind of freaking me out, because my biggest concern about this shoot is that we only have a limited time we can use the set, and we don't have the luxury of taking a lot of time for setups and transitions. I'm trying not to sound like a nervous nelly each time we discuss the shoot, but I don't think it's completely sunk in yet.

And yes, I did say "nervous nelly".

So what are ya gonna do about it, huh? Punk? Do you feel lucky?

That was my Clint Eastwood impression. I'll be appearing here all week. Thank you. Thank you very much.

I'm still trying to figure out who has the bigger case of "Psycho Eyes"...producer Chris "Serial Killer Eyes" Moore, or that high-strung Line Producer with the huge "Barney Google" peeps? What the hell are they putting in their coffee over at that studio, anyway? "I'll have a mochaccino with extra methamphetamine, please!" There's some serious pupil dialation goin' on. Weird.

Anyway, I'm trying to learn what I can from this show before our shoot. I don't think I'll be as indecisive and moody as Gulager; I'm going for the screaming and berating-type director; maybe like Michael Curtiz, of "Bring on the empty horses!" fame. (and read David Niven's book by that name for a quaint look at "Old Hollywood") All I need is a pair of riding britches and a crop.

Hmm...I wonder how I'll look with a monocle. Whatever happened to monocles, anyway? Did we suddenly develop stereo eye problems in the last 60 years, compared to the olden days when apparently only one eye went bad at a time?

I think television is to blame for it, but that's just a theory I'm working on. I'll keep you posted on my research. 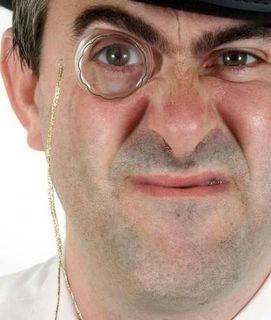 Jeez, is that a stupid looking picture, or what? What a goofy looking bastard. You think he could have shaved for his big "monocle photo"? I guess not. Obviously I'm very tired because I'm babbling about monocles and psychotic eyes. I guess it's time for me to get some "shut-eye".