It was nice not having to work today...things slowed down a bit workwise, and other than a ten-minute call from Headquarters, it was a day to catch up on movie stuff.

Damn, but it's nice that Spring has finally fuckin' sprung! Time to dig out the shorts and sleeveless T's (yes, I'm THAT guy). Today I'd be surprised if the local temperature readings didn't include an "80" here or there...and I'm not talkin' Celsius, friend; it's AMERICAN degrees, or NOTHIN' for me, dammit!

After helping my dear ol' Dad rewire a lamp (which required a trip to Home Depot and some clever innovation on my part), I went to the studio to confer with Technical Director extraordinaire John Ecay.

Lemme tell ya about John...he's a good guy. He took time out of his busy day to assist me in figuring out just how to make the mics work with the camera. We discovered that several of the $100 lavalier mics were messed up, and sounded tinny and quieter than the good mics. After several rounds of testing, I found two that sounded reasonably good and we can mix into the camera for decent (read: acceptable) audio.

John also helped us get coordinated with the camera and mic reservations. Because it's a public access station, it's basically first come, first served on reserving cameras and production equipment. We found that all the other cameras are being used this weekend, so we only have the one camera reserved. 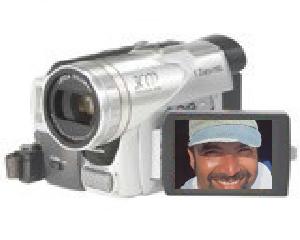 Bob graces the GS-70
However, our actress/crew Paulina is willing to use her camera for the shoot. The studio cameras are Panasonic GS-70 models, and Paulina happens to own a Panasonic GS-120, which is basically the same thing. Lucky frickin' break there! There's only minor differences between the two models, none of which will be apparent in the video or audio. Both cameras use the same Leica lenses, and both have three 1/6th inch CCDs. The recorded image will be exactly the same. Schweet!

So we'll somehow manage to get by with a two-camera shoot. Personally, I'm relieved. Anthony desperately wanted to go three cameras, but we're shooting in such a constricted space that I think three will be more trouble than they're worth.

He wanted three.
Ain't gonna happen.
Life can be a bitch.
Get over it.
Bigger fish need frying.
Get your spatula, bee-otch!

Tonight we have a conference call scheduled for 10PM with our other lead actor. We're going to go over the script and touch on some of the rehearsal stuff we did with the other actor on Monday. Basically, this will be it for rehearsals. We're kind of going into this thing cold...the actors will all meet one another the morning of the shoot! That's gonna be interesting, to say the least.

I've also decided to improv a short scene with our actress and the two leads on the spot. It'll be fun to see how quickly we can slam a new scene into the mix. I'm looking forward to it.

My wife just got home from shopping...she bought all the food for the shoot, so I have to help her carry it in. From a financial point of view, this is by far our biggest single expense associated with this project. I wonder how many other filmmakers spend so much to keep their crew happy?

(Note to Self: alienating Hollywood gorillas not a good idea...if you annoy them, they can bite; or at the very least, they may throw their poop at you.)
Posted by CT Bob at Wednesday, April 20, 2005