Day Two of the Big Shoot

Just got back from tonight's shoot. I'm somewhat played, but have enough energy for a quick post.

The shoot went great. We added a bunch of shots in the roughly two hours of time we were given. Load-in and setup took about an hour, which Anthony and I did because neither of our Chads could make it (last minute). Then the actors arrived, and after some costume modifications we got our first shot in by a few minutes after 6PM. 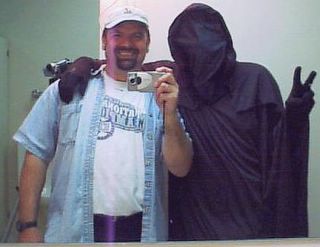 Did you ever get the feeling Death was hovering nearby?
We had to be out of there by 8:30, so we set up a cutoff time of 8:10 for our last shot. We worked like maniacs for the two hours, and I'll have to consult my shot list to be sure, but I'd guess we got at least 20 shots in. We literally grabbed shots one after the other; because all the action was taking place in one room, we didn't have to move too much equipment or lighting between shots. Our actors did a terrific job of going from scene to scene effortlessly while under extreme pressure. Kudos to the both of you.

Get used to seeing that costume pictured above...we're on such a low budget, it's probably going to be featured in our next five movies.

We agreed to another day of shooting, probably in about two weeks. More details tomorrow...it's time to crash for the night.
Posted by CT Bob at Monday, May 02, 2005